From young to old, trotters turned in fast miles on the Saturday, June 25 racing program at Harrah’s Hoosier Park. The featured event of the night was secured by Flagman and driver-trainer Rick Plano in a quick 1:51.2. 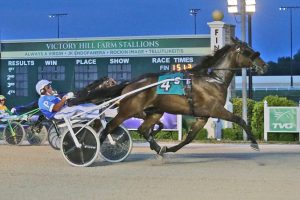 Flagman and Rick Plano scored a come from behind win in the featured Open Trot Saturday, June 25 at Harrah’s Hoosier Park. Photo by Dean Gillette

A field of six lined up behind the starting gate for the $22,000 Open Trot with Dunbar Hall and Sam Widger going out for the first lead at the quarter in :27.0. Whata Swan and Trace Tetrick were parked on the outside and cleared after the quarter to the lead. It’s a Herbie and Verlin Yoder then pursued the top spot, clearing to the front after the half in :55.0. From there, It’s a Herbie had a good lead on the field around the final turn.

In the stretch, Flagman, who had been sitting last most of the mile, moved to the outside and unleased a final panel of :26.1 to score the win by one length over It’s A Herbie. Whata Swan and Trace Tetrick finished third.

Flagman paid $13.40 for the win. The five-year-old Guccio gelding is owned by Maryann Plano and was bred by Pond-A-Acres. It was his ninth win of 2022 and the mile was a new lifetime best for the seasoned veteran. Overall, he is 21 for 64 with more than $233,000 earned.

From a veteran to a new trotter on the track, two-year-old Cincinnati Help kicked off the evening in the $10,000 two-year-old conditioned pace with a win. Starting from the center of the track, driver James Yoder left and secured the spot behind early leader Ponda Jet and Homer Hochstetler at the quarter in :29.0. The top two pulled away from the field by open length at the half in :58.4 and were both ready for the stretch drive.

Cincinnati Help tipped out and passed up Ponda Jet just before the finish line for the win in 1:57.1. Getnthecarchuckie and Verlin Yoder finished third.

Cincinnati Help was the favorite, paying $3.20 for the win. Yoder and his wife, Cheyenne, own the Helpisontheway gelding, who was bred by David Nissley. It was the first career start for the gelding after winning his sole qualifier in 1:59.4. He is out of the tough race mare Cincinnati Star, who earned nearly $600,000 during her career and took a mark of 1:56.0. She is nearly a 100 percent producer with All Star Swan, who is also racing at Harrah’s Hoosier Park, having the quickest time of her offspring at 1:55.1. She has a yearling filly named Crescent Star by Crescent Fashion, who will be in the sales this fall.

Cincinnati Help was one of 58 sold from the first crop of Helpisontheway. He was purchased at the Blooded Horse Sale by the Yoders for $7,500 and has already nearly paid for himself in one start.