Tropical Tracey has been very successful on the Indiana Sired Fair Circuit (ISFC) the past two years. Now, the Always a Virgin three-year-old can add a win at Hawthorne Racecourse to her credentials in 2020. Driven by Kyle Wilfong, Tropical Tracey scored her seventh win in her 14th start this season Sunday, Aug. 23 at Hawthorne. 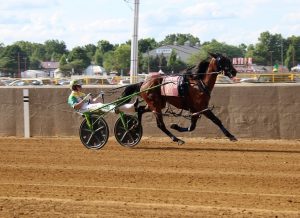 Tropical Tracey is shown winning at the Indiana State Fairgrounds last year with Trace Tetrick in the bike. She added a win at Hawthorne to her credentials Sunday, Aug. 23 with Kyle Wilfong in the bike. Photo by Diane Schuler

Trained by Donna Holt, Tropical Tracey came into the conditioned pace at Hawthorne off a win at Corydon last week. Wilfong guided her straight to the lead from the start and never backed down. She scored the win in 1:53.3 with a final panel in :29.2 for the victory. Pretty Iris and Ridge Warren finished second followed by Double Parked and Travis Seekman for third.

A longshot in the field, Tropical Tracey paid $22.20, $13.00, $11.60 across the board. She has now won four of her last five starts for owners D and R Racing Stable of Kentucky. Devon Beechy bred the filly who now has 14 wins in 27 career starts. Her career best time stands at 1:51.1 taken earlier this year at Harrah’s Hoosier Park.

Tropical Tracey will skip the ISFC at Converse Tuesday. A total of 25 races are slated for the program that begins at 11 a.m.