Indiana has seen several two and three-year olds compete at the Indiana Sired Fair Circuit level this year and go on to win in the pari-mutuel ranks. Two of those picked up wins Thursday, July 18 at Harrah’s Hoosier Park as Fishyriggins and Tropical Tracey both earned new career best times. 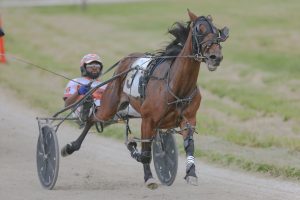 Tropical Tracey, with Clifton Bell in the bike, is shown winning one of her many Indiana Sired Fair Circuit races this year at Converse. Photo by Dean Gillette

Fishyriggins, owned by Zach Miller and Mike Hollenback and trained by Miller, was an early season top contender. His latest effort was in the $8,000 Indiana Sired Mini Series where he secured the lead just after the quarter mile marker in :27.4 for driver Trace Tetrick and never looked back, pacing home in :28.3 for the win in 1:55.0. Family Recipe and Lewayne Miller finished two and one-quarter lengths back in second followed by Roll With Time and Ricky Macomber Jr. for third.

Fishyriggins has now won three of five starts with earnings of $7,000. The latest win for the Riggins gelding out of the Whitefish Falls mare Whitefishjiffy was a career best time and his first at Harrah’s Hoosier Park. Fishyriggins is one of 24 two-year-olds sold at auction last season.

Fishyriggins was purchased for $6,000 from the Blooded Horse Sale last fall. Riggins, who stood out east in Delaware and then in New York, has had a very good first season in Indiana, seeing multiple winners at both the county fair and pari-mutuel level.

Later on the card, Tropical Tracey and Tetrick scored a similar trip in 1:56.0, pacing home in :27.4. The Always A Virgin filly was one and one-quarter lengths ahead of Big Girls Rule and John DeLong with Francium and Brandon Bates finishing third.

Tropical Tracey now has five wins in seven starts with two second place finishes. Her latest win was a new lifetime mark and her first at Harrah’s Hoosier Park. Tropical Tracey is trained by Donna Holt and owned by D and R Racing Stable of Benton, Ky.

The wins with Fishyriggins and Tropical Tracey were two of five on the card for Tetrick, who continues to lead the standings once again at Harrah’s Hoosier Park.