Tropical Tracey, a standout on the Indiana Sired Fair Circuit last year as a three-year-old, added another win to her credentials Monday, Nov. 1 at Oak Grove Racing & Gaming. Driven by Christian Lind, the Indiana sired mare was a dominant winner in 1:53.3. 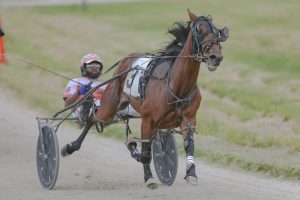 Tropical Tracey, shown at Converse as a three-year-old with Clifton Bell, scored her first win of 2021 Nov. 1 at Oak Grove Gaming & Racing. Photo by Dean Gillette

Starting from post one, Tropical Tracey got away third in the race as Machet Time and Kyle Wilfong went out for the lead followed by Country Love and Jamaal Denson. Machet Time regained the lead at the half in :56.2 and led the way to the stretch.

Tropical Tracey seized the moment around the final turn and was flushed first over, which catapulted her to the lead. She opened up on the field and was a four and three-quarter length winner at the wire, turning in a final quarter of :28.1. Wizzel Stix and Atlee Bender finished second over A Little Rusty and Joey Putnam for third. Demi Ivy, also an Indiana sired mare in the race that competed on the ISFC last year, finished fourth for driver James Stiltner.

Tropical Tracey paid $7.60 for the win. The Always a Virgin four-year-old mare is owned by D and R Racing Stable and trained by Curtis Rice. She earned her first win of the year in 20 starts. Her career best time still stands at 1:51.1 taken last year at Harrah’s Hoosier Park. She was a $6,500 yearling purchase by her connections from the Hoosier Classic Yearling Sale. Devon Beechy bred the mare, who now has more than $69,000 in career earnings.