Triple O was a triple threat in the $250,000 Carl Milstein Memorial for three-year-old pacers Saturday, Aug. 15 at Northfield Park. Odds on Osiris ventured out of Indiana for the first time and wore down the field for the win in 1:50.1, a new career best time. 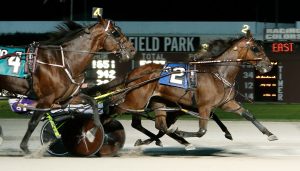 Odds on Osiris, shown winning the Milstein Memorial at Northfield Park, just went over the $500,000 career earnings mark for his connections. Photo by Northfield Park

Odds on Osiris and Peter Wrenn used enough speed to get to the front early but were quickly overtaken by Ocean Rock and Dan Noble before the first quarter in :26.0. Odds on Osiris sat right at his back through the middle fractions of the race before finding room in the final turn and flushing out to the first over spot.

Once he had clearance, momentum carried Odds on Osiris home in :27.3 to score the win just a neck ahead of Ocean Rock. Stanford Court and Ronnie Wrenn Jr. traveled wide in the final turn to move up for third.

Owned by Odds on Racing, Odds on Osiris topped a half-million in career earnings with the win. The Rockin Image three-year-old paid $15.00, $7.20, $3.60 across the board. Melanie Wrenn handles the training duties for Odds on Osiris, last year’s champion two-year-old colt pacer in Indiana.

Bred by Merlie Schwartz, Odds on Osiris is now two for four in 2020 with two second place finishes thrown in. He has only finished out of the top three once in his 14 career starts. Last year’s Fox Stake winner has competed in all of his starts at Harrah’s Hoosier Park, except for the win in the Fox Stake at the Indiana State Fair last year. He prepped for his three-year-old season with the Wrenn Stable in South Florida before returning north to Indiana once Covid-19 restrictions lifted for out of state horses to return to the Hoosier State.

In addition to Odds on Osiris, another Indiana sired pacer scored a win on the Northfield Park racing program. Vinovio, bred by Brett Wilfong, was a two and one-quarter length winner in conditioned pace action in 1:51.4. The Skydancer Hanover seven-year-old, driven by Ronnie Wrenn Jr., is owned by Schillaci Stables, Sam Bova Racing and Michael Epler. Sam Schillaci trains the gelding, who now has 22 wins in 149 career starts. He pushed his earnings over the $270,000 mark with his most recent win.