James and Cheyenne Yoder had a successful Saturday as three of their trotters visited the winner’s circle at Harrah’s Hoosier Park. Ideal Jesse, Ima Diamond Babe and May Baby all picked up wins for the Yoder Stable. 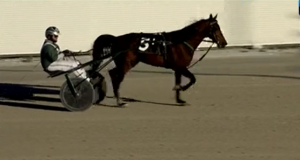 Ideal Jesse returns to the winner’s circle for James Yoder Saturday, Oct. 1 at Harrah’s Hoosier Park. It was one of three wins for the Yoder Stable on the Saturday card.

The evening started off with Ideal Jesse and James Yoder taking the opener in a time of 1:55.3. Starting from post four, the eight-year-old son of Jailhouse Jesse went straight to the lead, posting fractions of :27.3, :57.4 and 1:27.3. In the stretch, he led the field by three heading to the wire, coasting home for the win by two and one-half lengths over Collettes and John DeLong. Crystal Ice, a rare grey trotter, finished third for Robert Taylor.

In the stretch, Ima Diamond Babe went to work to chase down My Uncle Cuz. It took the entire length of the stretch, but the mare got the job done, winning by a nose over My Uncle Cuz. Pilgrims Image and Bradley Ferguson finished third in the mile timed in 1:55.2.

Ima Diamond Babe paid $10.20 for the win. The Guccio four-year-old, also owned by Cheyenne, was bred by Merle Yoder. It was the second win of the year for Ima Diamond Babe and her eighth overall. She has accumulated nearly $250,000 during her career with her career best record taken last year at three in 1:55.0.

The final winner for Yoder came with the talented May Baby. Yoder got away third with the now five-year-old mare as Share the Wealth and John DeLong placed fractions of :27.2, :56.4 and 1:25.4 on the board. May Baby trotted down the stretch with a final panel in :27.0 to score the win by a neck over Share The Wealth in 1:53.3. Latin Lover and Kyle Wilfong finished third.

May Baby was the favorite of the field, paying $4.40. The Guccio mare was bred by Oakwood Farm and picked up her third win in 2022. It was her 20th career trip to the winner’s circle for the Yoders and she is nearing $650,000 in earnings. Her career best time of 1:52.2 was taken at three and then matched as a four-year-old last season. She was making her 76th career start in the race.