On the eve of Breeders Crown eliminations at Harrah’s Hoosier Park, several Indiana sired horses were holding their own in the Circle City. A total of seven divisions were held for three-year-olds on both the trot and the pace with three of the races won by Indiana sired horses. 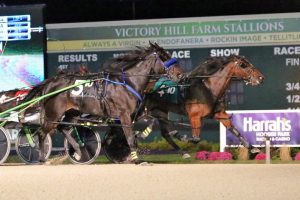 Genie Rockwell dug in gamely along the inside to come back for the win for driver James Yoder in the Circle City for three-year-old filly pacers Thursday, Oct. 22 at Harrah’s Hoosier Park. Photo by Dean Gillette

In the second division of three-year-old pacing colts and geldings in the Circle City, Sawyer’s Desire turned in a gutsy trip to score the win in 1:49.0. Driven by Dexter Dunn, the sophomore son of Real Desire got away in mid pack as Family Recipe and LeWayne Miller set the early tempo at :26.1. Splash Brother and Trace Tetrick quickly took over before the half in :54.1. Just after the mark, Sawyer’s Desire was flushed out first over for the journey around the final turn.

In the stretch, Sawyer’s Desire kept wearing down the leaders and eventually got the lead, drawing away to a two and one-quarter length victory in 1:49.0. Always and Again, an Indiana sired son of Always a Virgin driven by Andy Miller, closed in for second as a longshot in the field over Splash Brother for third.

Owned by Burke Racing Stable, Weaver Bruscemi and David Wills, Sawyer’s Desire paid $7.40 for the win. The Burke trained gelding earned a new lifetime mark with the win. It was his fourth trip to the winner’s circle in 2020.

Joining Sawyer’s Desire as a winner from Indiana in the Circle City was Mystical Carrie in the first division of three-year-old pacing fillies. Starting from post four, Mystical Carrie rolled out quickly for Trace Tetrick and secured the lead before the quarter in :26.4. The Tellitlikeitis sophomore continued her leadership role through fractions of :54.2 and 1:22.0 before seeing a challenge from McMarkle Sparkle and Peter Wrenn, who had been sitting at her back. Although McMarkle Sparkle closed in gamely, Mystical Carrie held on for the win in 1:48.4 with a final panel in :26.4. McMarkle Sparkle was a clear cut second place finisher over Penpaperpaige and Tyler Smith.

Mystical Marker Farms owns Mystical Carrie, who was bred by the farm. Erv Miller trains the homebred, who picked up a new lifetime mark. She has not finished worse than second in 11 starts this year with five wins and in excess of $171,000 in purse earnings in 2020.

Genie Rockwell made it a clean sweep in the three-year-old filly pacing ranks of the Circle City. Trainer-driver James Yoder had the Always a Virgin daughter ready to go when the gate sprung. Gai Waterhouse and Yannick Gingras held their ground from the inside post and kept Genie Rockwell at bay past the quarter in :26.3. Genie Rockwell was able to set the middle fractions of :55.0 and 1:22.4 before Keystone Eureka and Trace Tetrick got a neck head coming down the stretch. Genie Rockwell fought back and was able to win the stretch duel by a neck in 1:50.4 over Keystone Eureka. Gai Waterhouse finished third.

Genie Rockwell is a homebred for owner Marlin Fry, who is also the breeder on the filly with Glen Hershberger. It was her fifth win of the year in 13 starts. She now has in excess of $167,000 in career earnings.