Hawthorne Racecourse hosted it’s second program of 2020 Sunday, June 7 with three Indiana sired horses winning the first three races. Sweet Sally Sue and Clifton Bell kicked off the night with a win followed by Pine Dream and Brandon Bates in the second and Americanboy and Travis Seekman to sweep the early races. 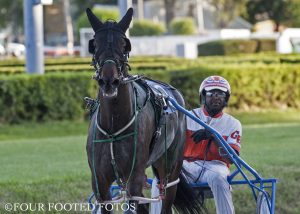 Sweet Sally Sue and Clifton Bell return to the winner’s circle following their win in the first race at Hawthorne Sunday, June 7. Photo by Amara Kranz of Four Footed Fotos at Hawthorne Racecourse

Trained and owned by Dossie Minor, Sweet Sally Sue used her inside post to her advantage from the gate, grabbing the top spot through the first quarter in :28.1 before Classic Country and Michael Oosting took over to set middle fractions in the $5,000 pace. In the stretch, Sweet Sally Sue tipped back out and took over, rallying to a four and three-quarter length lead in 1:52.4.

A daughter of Panther Hanover, Sweet Sally Sue was a surprise, paying $23.60 to win in the event. She was bred by Hoosier Standardbred Farm and Fair Meadow Farm. It was the first career win for the lightly raced three-year-old who broke her maiden in the event.

In the second race of the night, trotters took to the track for the $7,300 Open III. Pine Dream and Bates were on a mission from the start, crossing over to the lead after the quarter in :29.4. From there, they kept the contenders at their heels, trotting home in :26.4 for the three-quarter length win in 1:56.3. Louzotic and Kyle Husted finished second while Call for Justice and Casey Leonard finished third.

Pine Dream was also a bit of a surprise, paying $12.40 to win. Owned by Chupp Racing Stable, the eight-year-old Pinetucky gelding scored his second win of 2020 for trainer Merv Chupp. The seasoned veteran now has 37 career wins and in excess of $360,000 in career earnings. His best time of 1:53.1 was taken at Miami Valley Raceway as a six-year-old.

The third race of the night was dedicated to a division of the Phil Georgeff Series for pacers. Americanboy and Seekman went straight to the top and led every step of the way to win in 1:54.2, a final panel in :26.4. Frontier Rollo and Michael Oosting finished second over Hoosier Celebrity and Casey Leonard for third.

Americanboy is owned by Jabrykel Racing and trained by Dale Knox. The four-year-old Shadyshark gelding was bred by Loren Schmucker of Grabill, Ind. The gelding is out of the Indiana Sires Stakes winner Scruuppti, a Kilowatt mare who earned a mark of 1:55.1 and more than $100,000 during her career.

The other Indiana sired winner on the card included Skyway Trooper and Bates in 1:55.0 for the Hector Herrera Stable.