Trick of the Light and Michael Oosting shined bright in the second leg of Indiana Sires Stakes action Sunday, Aug. 1 at Harrah’s Hoosier Park. The two-year-old pacing filly posted the quickest time of two divisions on the card. 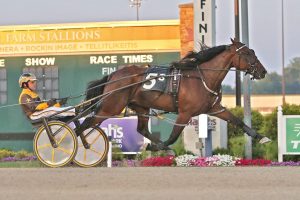 Trick of the Light got away from post five behind the starting gate and pursued the top spot as Hedda Hopper and Trace Tetrick showed speed inside with Cats Image and Ricky Macomber Jr. showing speed from the outside. The first quarter was clicked off in :26.0 before Trick of the Light crossed over to the inside path. Her time on the top was limited as Cats Image moved onto the lead before JK My Girl and Joey Putnam put a nose in front on the outside at the half in :54.2.

Oosting had Trick of the Light back out to challenge around the final turn and soared right on by the field, opening up to a two and one-quarter length advantage at the finish line in 1:51.2. Hedda Hopper maintained ground inside for second while Marvelous Marshia and John DeLong moved up late for third.

Trick of the Light paid $7.40 for the win in the 11-filly lineup. She is trained by Brian Brown and owned by Country Club Acres Inc., Joe Sbrocco and Kirk Nichols. Adam Eicher bred the freshman filly by Odds on Equuleus.

It was the second career start for Trick of the Light. She finished second in her first outing and now has more than $46,000 in earnings. She was the highest priced yearling sold by first crop sire Odds on Equuleus, selling for $50,000 at the Hoosier Classic Yearling Sale under the name of Lady Bellatrix. Odds On Equuleus is off to a great start. Out of 10 sold at public auction last fall, eight have started with two of those taking marks under the 1:55.0 time barrier already.

Trick of the Light is following in the footsteps of her older half sister, JK She’s Gordjus, who earned a mark of 1:52.1 last year and earnings over $70,000. They both are half sisters to Kak’s Rockin, who is still racing and is nearing $100,000 in earnings. Their dam, Gordjus, by Dragon Again, is a 100 percent producer with four foals all racing this season. There is a yearling colt by Check Six that will be ready for the sales this fall.

The other division was won by Alloutblitz and Sam Widger for the Jeff Cullipher barn. The JK Endofanera filly moved to the lead after the quarter and fended off late challengers for the win by a head in a three-horse photo in 1:53.4. Always Gonna B You and John DeLong finished second over JJ Endofanera and Trace Tetrick for third.

Alloutblitz is owned by Pollack Racing LLC and Cullipher. She was bred by Duane Miller and is now three for three in her brief career.

On the freshman pacing colt side of things, Fulfullnmydestiny and James Yoder rallied home in :26.1 to win the fastest of two divisions in 1:51.1. The Tellitlikeitis gelding, owned by Brett Boyd Racing Inc., paid $14.40 for the win. JK Victory and Tim Tetrick finished second over Bowie Rocks and Ricky Macomber Jr. for third.

It was the first win in four starts for Fulfullnmydestiny. The homebred gelding has in excess of $50,000 already in earnings this season.

The other division of two-year-old colts was won by Ponda Warrior and Brandon Bates. Trained by Jay Hochstetler, the Rockin Image colt scored the gate to wire win by four lengths at the wire in 1:52.1, a final panel in :26.3. The Longest Yard and Michael Oosting finished second. Gentle Giant and Trace Tetrick finished third.

Ponda Warrior is owned by Hochstetler, Finkelberg Racing LLC and South of the Tracks Rac Inc. Pond-Acres bred the colt, who is now three for three. He earned his career best time earlier in July in 1:51.3.