Triathlon AS kicked off the Saturday card Nov. 27 with a win in the $13,500 Harrah’s Joliet series. It was the first of four wins on the card for Trace Tetrick, who will earn another leading driver title at Harrah’s Hoosier Park when the 2021 racing season comes to a close next weekend. 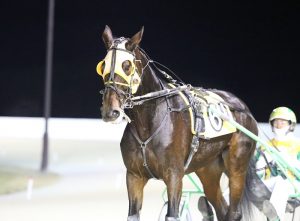 Triathlon AS scored the win in the Harrah’s Joliet Series at Harrah’s Hoosier Park Saturday, Nov. 27 with Trace Tetrick in the bike. Photo by Dean Gillette

Triathlon AS began her journey from post six and got away in mid pack as Magic Night and Todd Warren set the early tempo at :27.2. Down the backstretch, Cassius Lane and Brandon Bates moved out to take over at the half in :57.2 and three-quarters in 1:27.0. Triathlon AS was able to grab the cover behind Cassius Lane heading into the final turn.

In the stretch, Triathlon AS kept up her momentum and rallied toward the lead, fighting all the way to the wire with Cassius Lane to seize the win by a nose in 1:56.3. Muscular Babe and Kyle Wilfong finished third.

Triathlon AS is trained by Matt Rheinheimer and owned by Every Day Stable and Faron Miller. ACL Stuteri AB bred the Trixton four-year-old, who now has six wins this season. Her best time was taken earlier this year at Harrah’s Hoosier Park in 1:54.0. She increased her career bankroll to more than $81,000 with her latest win. She began her career at Harrah’s Philadelphia as a two-year-old under Anette Lorentzon before joining the Matt Rheinheimer Stable as a three-year-old.

Another winner on the card was Makeitagaingo and Jordan Ross, who were victorious in the $9,000 Flamingo Las Vegas Series. The duo sat patiently in the two-hole before rallying in the lane for the win by a neck in 1:54.1. Brooke’s Ocean and Atlee Bender finished second over Comaneci and Braxten Boyd in third.

Makeitagaingo, who began her career on the Indiana Sired Fair Circuit at two, paid $6.80 for the win. The four-year-old Riggins mare is trained by Robert Taylor and owned by Devon Miller. Marlin Miller bred the mare, who now has 14 wins in 50 starts. Her career bankroll now exceeds $79,000 and her career best time of 1:52.2 was taken earlier this year at Harrah’s Hoosier Park.