Training at Harrah’s Hoosier Park is in its final stages for opening night Friday, March 26. With the opening date looming, several county fairgrounds in the state are also seeing an influx of horses prepping for the 28th season of Standardbred racing. 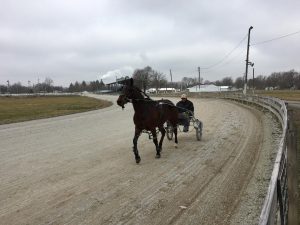 Ray Allen gets some work in on one of his stable’s young horses at the Shelby County Fairgrounds in preparation for the 2021 racing season in Indiana. Photo by Tammy Knox

The Shelby County Fairgrounds houses more than 50 horses through several different trainers. In addition to the residents on the track, several area stables are also shipping in from farm tracks to put the final works in before heading to the pari-mutuel ranks. One of the local stables on the grounds at Shelbyville is the fleet of horses from the Ray and Alice Allen Stable. The duo has numerous horses in training for both racing at Harrah’s Hoosier Park and the upcoming Indiana Sired Fair Circuit season.

Horsemen and horsewomen have a lot to look forward to at Harrah’s Hoosier Park this season. Opening weekend will include Fan Appreciation Weekend both Friday, March 26 and Saturday, March 27. First post is set for 6:30 p.m. both nights. Friday will feature $100 Mega Bet drawings, 2021 racing posters, $15,000 Guaranteed Hoosier High Five, and handicapping contests. Also, opening night will feature $1 bets, $1 programs, $2 hot dogs and Floats at Dog N Suds, and $4 glasses of Bacardi Punch at The Shoe. Fans attending Saturday’s program will enjoy a t-shirt giveaway to the first 500 Caesars Rewards members.

One final set of qualifiers before the meet starts will be held at 5 p.m. Wednesday, March 24. A horsemen’s meeting with IHRC officials and track management is set for 4:45 p.m. in the paddock prior to the evening qualifiers used as a dress rehearsal for the season.