Gorgeous for Real, an Indiana sired son of He’s Gorgeous, picked up his first win of 2020 Tuesday, March 31 at Cal Expo. The six-year-old gelding won the $4,200 conditioned pace by three and one-half lengths in a time of 1:52.0 during his gate to wire performance. 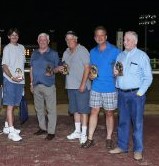 James Wilkinson, third from left, was part of the winning team from Harrah’s Hoosier Park in Saturday Shootout last summer. Wilkinson comes to Hoosier Park each summer to race and play in the track’s handicapping contests. Photo by Coady Photography

Owned by Billie Schwartz, James Wilkinson, Robert O’Neill and Ivan Axelrod, Gorgeous For Real was driven to victory by Luke Plano. Wilkinson trains the Alvin Schwartz-bred gelding, who now has 21 career wins and in excess of $100,000 in career earnings. His career best time still stands at 1:50.3, taken last summer at Harrah’s Hoosier Park.

Wilkinson, a resident of California, travels to Indiana each summer to race at Harrah’s Hoosier Park. He competes in all of the track’s handicapping contests. He has been among the top five players the past few years to represent Hoosier Park in Saturday Shootout, the joint contest between Hoosier Park and Indiana Grand. Wilkinson was part of the winning team the past two years. Last year, he was on the team that won the Saturday Shootout final held at Indiana Grand where the winning team split $5,000.