Fresh on the heels of Luckychris’ track record performance on Wednesday at the Converse Fairgrounds in the two-year-old colt pace, two more track records fell at Converse Thursday, July 17 in Indiana Sired Fair Circuit (ISFC) action. Three-year-old colt and gelding pacers were led by Vel Letsroll South and Clay Craib in 1:56.3 for the new record while Walk With Me and Doug Rideout set a new record for two-year-old filly trotters. 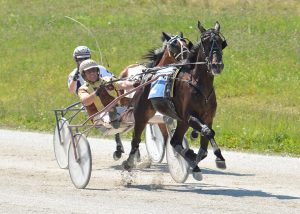 Walk With Me and Doug Rideout trot to a new track record of 2:02.0 for two-year-old trotting fillies at Converse Thursday, June 17. Photo by Dr. Alan White

Walk With Me, owned by Matthew Miller and trained by Rideout, sat patiently in the two-hole for Rideout until the stretch, where she moved out and trotted home in :31.0 for the win by a neck over Sassy Bab and Charlie Conrad, who also closed in the stretch. ABC Tucky, the race tempo setter, finished third for Matthew Avenatti.

It was only the second career start for Walk With Me, who also competed in the first session of the ISFC at Converse in early June. The daughter of Striking Lindsey, bred by Karl Dean Miller of Ligonier, Ind., is now one for two in her brief career.

Walk With Me earned the track record by two-fifths of a second over the previous mark set by Miss Greenbacks and Doug Rideout one year earlier at Converse. Miss Greenbacks is also owned by Matthew Miller.

Three-year-old pacers were featured later in the card and Vel Letsroll South and Craib earned their win the hard way. Starting from the second tier in post six, they were parked every step of the mile as they tried to get positioning early. Northern Network and Jordan Ross set the fractions of :28.2, :57.2 and 1:26.2 before Vel Letsroll South got into the mix at the head of the lane. The three-year-old Time to Roll gelding, trained by Larry King, paced home in :30 seconds flat for the win by three lengths. Northern Network was second while DD’s Big Joe and Bradley Ferguson finished third.

Vel Letsroll South is owned by King Racing Stable and was bred by Charlie K Racing Inc. It was his second win of the season. His lifetime mark of 1:55.2 was taken as a two-year-old for his connections at Harrah’s Hoosier Park.

The previous track record for sophomore pacing colts and geldings was set in 2018 by King Lil Joe and Jay Cross in 1:56.4.