With only one month into the new year, Trace Tetrick, Harrah’s Hoosier Park all-time leading driver, is currently ranked fourth in the country for wins. Tetrick has posted 55 wins through the first 36 calendar days of 2019. 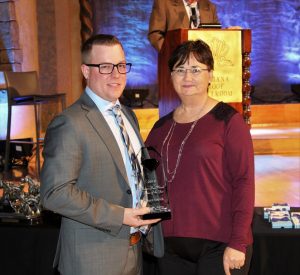 ISA Director John DeLong presents the 2018 Driver of the Year award to Trace Tetrick at the annual banquet. Tetrick’s mother, Maryalice, accepted the award on behalf of Tetrick, who was racing at Miami Valley during the event. (Photo by Diane Schuler)

A native of Geff, Ill., Tetrick soared into action at Hoosier Park in 2006 after starting off in Illinois as a driver in 2003. Since that time, he’s won numerous major stakes, including two Breeders Crowns. Tetrick is also listed in sixth place among all North American drivers in earnings, pulling in $473,286 thus far, maintaining a driving average of .376.

Tetrick was honored as the Hoosier State’s top driver again at the annual ISA Awards Banquet, held Saturday, Jan. 26, 2019 at the Indiana Roof Ballroom in downtown Indianapolis. However, he was unable to attend because of driving commitments at Miami Valley Racing in Ohio, where he scored a driving triple during the night. His mother and father, Maryalice and Tom Tetrick, were on hand to accept the award on behalf of Tetrick.