Townline Jated, last year’s swift freshman from the Jay Cross Stable on the Indiana Sired Fair Circuit, is getting a little closer to his sophomore debut. The three-year-old son of Riggins turned in his second qualifier at Gil Crest Training Center Saturday, April 25, earning the win in 2:02.0. 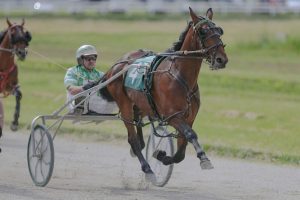 Driven by trainer Jay Cross, Townline Jated was unrushed out of the gate as Poof Daddy and Krista Harmon established fractions of :31.0 and 1:03.4 before making a move to the lead and taking over at the three-quarter mile marker in 1:33.0. The gelding paced home in :29.0 to secure the win by one and one-half lengths over Poof Daddy.

Townline Jated is owned by Maynard Miller and Michael Yoder of Shipshewana, Ind. He scored six wins in nine starts last year at two, only missing the top two once in nine starts. His quickest win was recorded during the Indiana State Fair in 1:53.0. In all, he earned more than $21,000 during his first year of racing for his connections, who purchased him out of the Hoosier Classic Yearling Sale for $10,000.