Tough Muscle proved he is like his name as he turned in a tough mile to win the featured $22,000 Open Trot Tuesday, Nov. 22 at Hollywood Gaming Dayton Raceway. Guided by Chris Page, he was a winner in 1:53.3. 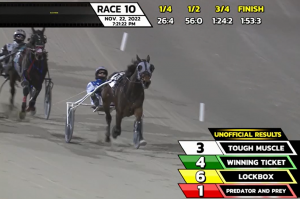 A small field of six lined up for the featured event with fellow Indiana sired contender Predator and Prey and driver Josh Sutton leading the way. Fractions of :26.4 and :56.0 were established before Winning Ticket and Trevor Smith pulled to the outside to advance, flushing Tough Muscle to the outside just before the three-quarters in 1:24.2. Around the final turn Tough Muscle was able to advance enough to put a neck in front as the field rounded the turn and headed for home.

Once in the lane, Tough Muscle moved away from the field by a few lengths and trotted home in :28.4 before Winning Ticket closed the gap late to finish one length back in second. Lockbox and Tyler Smith, a stablemate of the Ron Burke trained Tough Muscle finished third.

Tough Muscle paid $7.40 for the win. The Musclesprinctonian four-year-old gelding is owned by Burke Racing Stable LLC and Weaver Bruscemi LLC, both of Pennsylvania. Libby Myers bred the gelding, who is from the second crop of Musclesprinctonian. There are only 32 registered foals by Musclesprinctonian over five crops before he was moved to Michigan beginning in 2021. Tough Muscle is his top performer with his mark of 1:53.3 Tuesday his career best. He now has more than $185,000 in earnings.

Another Indiana sired winner on the night was in the very next race. Tell the Dream, driven by Tyler Smith, turned in a gate to wire effort in the $12,000 upper level conditioned pace for fillies and mares on the pace.

Tell The Dream opened up on the field in the stretch to win by two and one-quarter lengths in 1:52.2, a final panel in :28.0. Yes Indeed and Brett Miller finished second over Indiana sired Differentforgirls and Tony Hall for third.

Tell the Dream paid $4.60 as the favorite of the field. The Tellitlikeitis three-year-old filly is owned by Dustin Sanders and trained by Merv Chupp. Jacob Miller bred the filly, who now has six wins in 31 starts this year. She was unraced at two. Her career best time was taken in the Tuesday mile at Dayton.