A pair of Dover Dan two-year-olds kicked off the Saturday racing card at Harrah’s Hoosier Park with wins. Every Day Dan and Robert Taylor won the first division while Topville Swift Dan and John DeLong took top honors in the second division of the $12,500 Indiana Sired mini Series for freshman trotting colts and geldings. 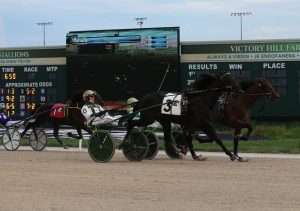 Topville Swift Dan started his journey for DeLong from post three and made a move toward the leaders, parked on the outside in fifth through the quarter in :29.1 as Topville Master and Bradley Ferguson set the first fraction. Topville Swift Dan was able to get to the inside and save some ground at the half in :58.4 before being flushed out again before the three-quarters in 1:29.2. In the stretch, Delong got the Dover Dan gelding in gear and he trotted home in :28.4 to snag Cantabene and Trace Tetrick at the wire, winning by a head in 1:58.4. Inquisitive Dan and Brandon Bates moved up for third.

Topville Swift Dan is owned by Jesse and John DeLong. Tabitha DeLong trains the gelding, who was bred by Merle Yoder. It was the first win of his career in five starts. He is a half brother to the standout trotting mare Satin Dancer, who earned more than $700,000 during her career. The family has a yearling full brother this year to Topville Swift Dan named Topville Sebastian who will be offered at the sales this fall. Topville Swift Dan is was purchased for $28,000 last year at the Hoosier Classic Yearling Sale.

Prior to the win from Topville Swift Dan, Every Day Dan was a winner for Taylor in 1:58.0. Having the inside post placed the gelding close to the lead early on as Temple City and Ricky Macomber Jr. took over after the quarter in :29.1 before Every Day Dan was back out to retake at the half in :59.4. From there, the freshman trotter held steady until opening up on his opponents in the stretch, winning by three and one-half lengths, a final panel in :27.4. Spell Goodlookin and Dan Shetler finished second over Mr Athens and John DeLong for third.

Every Day Dan was the favorite of the field, paying $5.20. He is owned by Pure Cotton Stables and Taylor Racing LLC. Luckiana Farm bred the gelding, who was a $9,000 purchase from the Hoosier Classic Sale last fall. It was his first career win in four starts for Taylor.