Topville Rustler, owned, trained and driven by Mike Peterson, was a winner in the first round of the Omar Hiteman Memorial Late Closer Monday, Feb. 8 at Miami Valley Raceway. The Always a Virgin four-year-old was a winner in one of four divisions on the card. 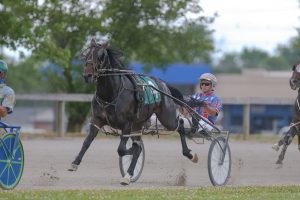 Topville Rustler, shown as a two-year-old at the Clinton County Fairgrounds with owner-trainer-driver Mike Peterson, earned a new career best record in his first start of 2021, a division of the Omar Hiteman Late Closer at Miami Valley. Photo by Dean Gillette

Starting from the inside post one, Peterson had Topville Rustler primed for speed as the gate folded. He got out on top to set the fractions of :27.3, :56.4 and 1:25.0. He held strong as Powerbet and Tyler Smith tried to take advantage of their two-hole trip and tried to gain ground on Topville Rustler in the final strides, but the leaders were too tough, holding on for the win by three-quarters of a length in 1:53.2, a final panel in :28.2. General Idea and Brett Miller closed to finish third.

Topville Rustler paid $18.60 for the win. Bred by Merle Yoder, it was the first start of 2021 for the stallion, who now has seven career wins in 29 career starts. The mile also marked a new career best time for Topville Rustler.

Two other Indiana sired horses were also winners in their respective divisions of the Omar Hiteman Series. Driven by Brett Miller, My Wish Came True left for the lead but was parked out at the quarter in :28.0. Once he made the lead, he was strong to the wire, winning by a neck in 1:53.2. Play Me Rock and Trevor Smith finished second over JW’s Chrome and Kayne Kauffman for third.

Also visiting the winner’s circle in the Hiteman Series was Hamsandwich from the Adam Short Stable. Trace Tetrick moved from the three-hole past the quarter to take control of the lead and never looked back, striding away to a three and three-quarter length lead in 1:55.4. Micheal and Chris Page finished second over La Tomcat, another Indiana sired horse by Time to Roll, driven by Don Eash for third.

Hamsandwich was a big favorite in the field. The Tellitlikeitis four-year-old is also owned by Short. He was bred by Dustin and Sherri Heinzen and Chad Clark.