Always a Prince and Custom Cantab pulled in Grand Circuit wins Friday, Nov. 2 to represent Indiana at Hoosier Park Friday, Nov. 2 but the real winners were the fans. The entire evening was dedicated to creating a perfect fan experience, led by a special appearance by Foiled Again, who was utilized in several different aspects of the night. 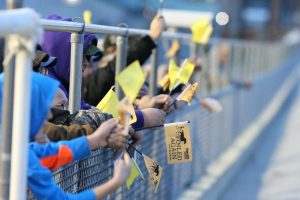 Fans lined the fence with special Foiled Again banners to help welcome and celebrate the 14-year-old superstar during a special night of racing at Hoosier Park Friday, Nov. 2. (Photo by Hoosier Park)

Foiled Again started his night off with providing the post parade for the first race. The double seated jog cart was dusted off and ultimate fan T. Jackson won the seat beside Trainer Ron Burke for the ride down the track.

Then, Foiled Again returned to the paddock to prepare for his second assignment of the night, racing in a division of the Dick Macomber Memorial where he finished second in 1:51.4 at the age of 14 with Ricky Macomber Jr. in the bike.

After a bath, Foiled Again walked down to the front paddock and took his spot to provide a meet and greet with fans. Many photos were taken and fans enjoyed visiting the horse up close while some of the nation’s best horses were competing on the track, including top performances by Always a Prince and Custom Cantab.

Driven by Peter Wrenn, Custom Cantab didn’t disappoint, picked up the lead just after the quarter and never looking back, trotting home in :28.2 for the 1:54.1 win by one-half length over Seviyorum and Andy Miller. Looking for Zelda and Matt Kakaley finished third.

Later in the card, Always A Prince and Trace Tetrick grabbed a perfect trip along the inside as favored Lather Up and Montrell Teague rolled to the front in the $190,000 Monument Circle. A break down the backstretch caused some confusion and Dorsoduro Hanover and Matt Kakaley, last week’s Breeders Crown winners in the sophomore pacing colt division, inherited the lead. Always A Prince was out and driving in the stretch and got by Dorsoduro Hanover, but Lather Up rebounded and crossed the finish line first. Lather Up was disqualified, which placed Always A Prince up for the win in a time of 1:49.3. Dorsoduro Hanover was placed up to second followed by Rockinbeach and Ricky Macomber Jr. who were placed up to third.

Hoosier Park once again hit the ball out of the park with a top notch evening all around. It is another example of how Indiana Standardbred racing is emerging as an industry leader with an all around program.