The past decade in Standardbred racing for the state of Indiana has exploded. It has brought a lot of excitement and change. There were numerous top events over the past 10 years that would merit being among the top five. Below are the top five stories as selected by the Indiana Standardbred Magazine believed to have had the most impact on the state’s Standardbred industry. 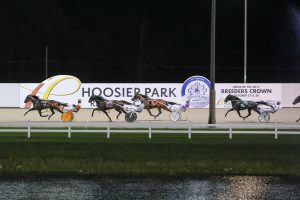 A shot of the backstretch at now Harrah’s Hoosier Park in anticipation of the prestigious Breeders Crown slated to make its debut in Indiana in 2017. Photo by Dean Gillette

5. Indiana sired horses go national. Names such as Always B Miki, Hannelore Hanover, Wiggle It Jiggleit, Homicide Hunter and more over the past five years are just a few names that have extended the breeding program outside of the borders of Indiana, and the list keeps on growing. On any given day, results from racetracks all across the United States sport winners from the Hoosier State and many of these horses have garnered the industry’s top awards. It’s been great news for breeders in the Hoosier State as the program continues to grow, and new records were set at the Hoosier Classic Yearling Sale this past fall with two selling for $175,000 each. That’s a good way to start a new decade.

3. Freaky Feet Pete wins Breeders Crown. There have been several Indiana sired winners of the Breeders Crown over the past five years, but none have made an impact like the victory of Freaky Feet Pete and Trace Tetrick in 2015. The “hometown horse” had, and still has, a huge following, partly because of his name and partly because of his success. Trainer Larry Rheinheimer also splashed onto the national headlines as a result of “Pete’s” success on the national scene.

2. Centaur Gaming buys Indiana Grand. With the purchase of Indiana Grand came big changes to Indiana’s Standardbred industry in 2013. The state implemented a “one track, one breed” system placing all Standardbred racing at Harrah’s Hoosier Park. Being based at one location was advantageous for all and numerous investments took place in and around Anderson with farms and training centers sprouting up in all directions, showing the economic impact of racing in the Hoosier State.

1. Breeders Crown comes to Indiana. The arrival of Standardbred racing’s most prestigious event was a dream come true for Hoosier horsemen and horsewomen in 2017. The two-day event was pulled off flawlessly by the staff at Harrah’s Hoosier Park and the event saw three Indiana sired champions in the series in Fiftydallarbill, Hannelore Hanover and Beckhams Z Tam. It was truly a night to remember and one to replicate for the 2020 racing season.