Indiana Sires Stakes Champion Tookadiveoffdipper is currently leading the nation in purse earnings for all ages in 2020. The Always A Virgin gelding has won four of his seven starts this season with two third place finishes added in. 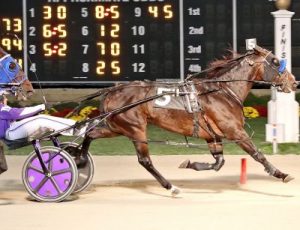 Tookadiveoffdipper, shown winning at Dayton last year, is currently leading the nation in purse earnings for all ages in 2020. Photo by Conrad Photography of Dayton Raceway

Tookadiveoffdipper has accumulated more than $83,000 to top the list this season. The six-year-old is just shy of $400,000 in career earnings for owners Jane and Mark Cross of Olney, Ill. and Knoxville, Tenn., respectively. The Indiana sired horse was bred in Iowa by Van Otterloo Stables.

Tookadiveoffdipper was on a two-race winning streak at Yonkers in the Open Handicap before racing was halted due to the Covid-19 virus outbreak in the state of New York. They were one of the first tracks to cancel due to the virus. Virgil Morgan Jr. trains the gelding, who began his racing career as a two-year-old on the Iowa fair circuit. His best time to date is 1:49.2 taken at Dayton as a four-year-old.