Tookadiveoffdipper and trainer-driver Pat LaChance, scored a win at Yonkers Raceway in conditioned pace action Monday, April 5. The duo covered the one-mile distance in a time of 1:54.0. 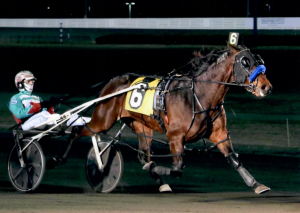 LaChance got Tookadiveoffdipper right to the lead out of the gate and never looked back, scoring the victory by one-half length over Tito Rocks and Tyler Buter. Rock the Devil finished third for driver Dexter Dunn.

Tookadiveoffdipper paid $9.60 for his win. The now seven-year-old gelding by Always a Virgin is owned by Jane Cross and Mark Cross. The 2020 Older Pacer of the Year in Indiana was bred by Van Otterloo Stables in Iowa.

Tookadiveoffdipper had his best season yet last year at six, winning eight of 27 starts with earnings for the year of nearly $150,000. Overall Tookadiveoffdipper has won 40 races and is nearing the $500,000 mark in earnings. His quickest time was recorded as a four-year-old at Dayton Raceway in a time of 1:49.2.