Tony Renz, who has been involved in racing and gaming in the state of Indiana for the past 16 years, has been named the first executive director of the Indiana Standardbred Association (ISA). Renz was introduced to the crowd in attendance at the annual Indiana Standardbred banquet Saturday, Jan. 22. The ISA Board voted in 2021 to add the new position to work as a liaison between track and legislative projects as well as represent the organization and various industry events throughout the year. 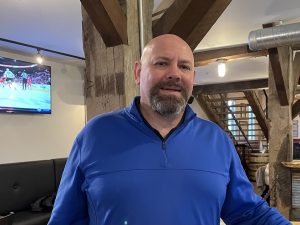 Tony Renz has been named executive director of the ISA. Renz was introduced to the crowd at the annual Indiana Standardbred banquet Saturday, Jan. 22. Photo by Tammy Knox

“I want to thank the ISA for welcoming me back to Indiana and for choosing me for this position,” said a humble Renz during the banquet. “I’m so excited to be involved with Standardbred racing and I’m ready to hit the ground running.”

Renz, who resides in Noblesville, Ind. with his wife, Tina, daughter, Elizabeth, and son, Zach, began his duties Monday, Jan. 24. For the bulk of his time in Indiana, he has worked as the Director of Marketing Partnerships for both Harrah’s Hoosier Park and Indiana Grand, now known as Horseshoe Indianapolis. With a brief few months working at Fairmount Park in sponsorships, Renz is back in Indiana and ready for his new position.

Renz grew up in Louisville, Ky. right across the street from Churchill Downs. His father was an avid horse racing fan and took him to the races often at both Churchill and Louisville Downs. Following graduation from Murray State with a degree in Business Management, Tony worked in the restaurant industry while his wife worked on her Master’s degree and eventually landed in the position of director of purchasing for Caesars Southern Indiana, which led him to the same position at Hoosier Park in 2007. Soon after, he was promoted to director of marketing partnerships and in 2013, assumed the same role over Indiana Grand when Centaur Gaming purchased Indiana Grand.

Renz developed a fondness for Standardbred racing and was behind some of the track’s most successful promotions, including partnerships with a brewery in downtown Indianapolis who developed the Dan Patch adult beverage, the Indy Car driver celebrity race, and exposure and support for two Breeders’ Crowns at Harrah’s Hoosier Park, just to name a few. During this time, he developed a deep appreciation for Standardbred racing and notes his favorite moments to date in racing including two Indiana sired horses.

“There are two races for me that stand out,” said Renz. “The first was Freaky Feet Pete in the 2015 Breeders Crown at Woodbine. I was there with Becky (Young) and Rick (Moore) to observe and prepare for the event to come to Indiana. We were sitting right next to Larry Rheinheimer. That was my first experience with a Breeders Crown and the emotion and excitement of that race and that night was very touching.”

“The other race that stands out to me was when Beckham’s Z Tam won the 2017 Breeders Crown at Hoosier Park,” continued Renz. “Watching the Macombers in the winner’s circle was something I’ll never forget and I shared their emotion of that moment.”

Renz has a passion for racing, and with his expansive connections in Indiana through his past work in the industry, he brings a unique set of skills to the ISA that will enhance the new position. He will work closely with the ISA Board as preparations are underway for the 2022 racing season.

“I feel like I was made for this position,” said Renz. “I feel it fits my skill set well. My goal is to continue to help promote Standardbred racing in Indiana. It’s a top track in North America and there are people in this area that are not aware of what’s in their backyard.”

A full story on Renz with more detail on his background and goals for the ISA will be provided in the March issue of the ISA Magazine.