TJ’s Top Pick is preparing for a return this year. The Indiana sired son of Swan for All was solid all season, winning eight of 10 starts and earning in excess of $300,000. As a result of his stellar freshman year, TJ’s Top Pick is on the list of Top 10 Three-Year-Old Trotting Colts and Geldings for 2020 in the recent “Sneak Preview” in Hoof Beats. 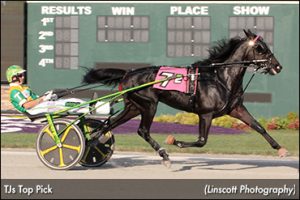 Owned by Pollack Racing, Jeff Cullipher and Trace Tetrick, TJ’s Top Pick was the state’s champion freshman trotter last season. Purchased for $40,000 from the Hoosier Classic Yearling Sale, the colt has a full roster of stakes planned in 2020. Although not eligible to the Hambletonian, he will have opportunities outside of the Indiana Sires Stakes to shine, eligible to Grand Circuit stakes such as the Circle City and most likely the Breeders Crown, which is being held at his home track Oct .30 and 31.

TJ’s Top Pick is ranked fifth on the list of top sophomore trotting colts and geldings for 2020. His best time of 1:53.3 is the fourth fastest on the top 10 list. His career best was also a new track record for two-year-old trotting geldings. He is trained by Jeff Cullipher, Harrah’s Hoosier Park’s top trainer the past three seasons.