Thunder Country and Trevor Smith turned in a gate to wire performance during the Sunday, Aug. 29 racing card at Harrah’s Hoosier Park to score their maiden breaking win. The freshman gelding won the $10,500 event in 1:54.0. 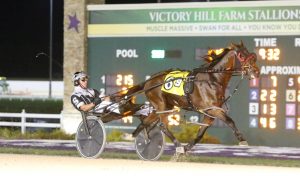 Thunder Country went straight to the lead when the gate folded, popping off fractions of :27.4, :58.2 and 1:26.4, keeping the field behind him by open lengths. In the stretch, he increased the tempo and paced home in :27.1 for the win by two lengths. Mayor Ofthemoment and Michael Oosting closed in with a :26.2 final panel to finish second over Blazin Mooss and LeWayne Miller, who sat second the entire way to finish third.

Thunder Country was making his ninth career start. He came into the race with five second place finishes. The Rockin Image son now has nearly $20,000 in career earnings for trainer Michelle Finn. Ervin Wickey owns Thunder Country, who was bred by Ernie Lambright. He was a $10,000 yearling purchase at the Hoosier Classic Yearling Sale last fall. He is a half brother to Lieutenant Dan, who recently scored a win at Lexington at The Red Mile in 1:54.1 in his first year of racing as a three-year-old.

Also on the Sunday card was an impressive performance by May Baby and James Yoder in the featured $22,000 Open Trot. The duo started from post four and was able to secure the early spot in second behind leader Pick Me Upper and Brandon Bates. In the stretch, Yoder tipped May Baby to the outside and she trotted home for the win in 1:52.2, a final panel in :27.4. Two O B Wonkenobi and LeWayne Miller finished a half-length back in second with an inside move over Pick Me Upper for third.

A mild longshot, May Baby paid $14.60 for the win, which equaled her career best time taken last year at three. The Guccio filly now has in excess of $546,000 for owner Cheyenne Yoder. It was her third win of 2021.