Coming into the sixth and final leg of Indiana Sires Stakes action for two-year-old colts and geldings, Thunder Country was ranked 11th on the list, seeking a spot for the $250,000 final. He accomplished his goal by winning his division of the series in 1:51.2. 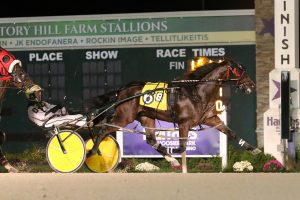 Thunder Country and John DeLong solidified their place in the Indiana Sires Stakes final next Friday, Oct. 15 with a win in the final preliminary round Thursday, Oct. 7. Photo by Dean Gillette

Starting from post six, Thunder Country found a spot in third from the start, following behind Big Law and Sam Widger in second, who sat right behind race favorite Ponda Warrior and Brandon Bates through the first quarter in :27.3. Big Law moved to the outside to take his turn on the front at the ahlf in :56.0 but driver John DeLong kept Thunder Country right on the back of Ponda Warrior through the three-quarters in 1:24.1.

In the stretch Thunder Country found the room he needed and moved up the inside to score the win by one length, a final panel in :26.2. Big Law finished second while Paw Patrol and LeWayne Miller closed the quickest of all to finish third.

Thunder Country was a longshot, paying $27.80 for the win. The Rockin Image gelding is trained by Michelle Finn for owner Ervin Wickey. Ernie Lambright bred the freshman, who now has three wins in 14 starts. His win in the final round of preliminary action of the ISS was a new lifetime mark. With several second place finishes, Thunder Country has in excess of $86,000 in earnings. Thunder Country was also a winner in leg four of Indiana Sires Stakes action.

In the other division of two-year-old pacing colts and geldings, Gentle Giant and Trace Tetrick scored the win by a neck in 1:50.4. The JK Endofanera colt rallied gate to wire for the win. Trey’s Charlie and Sam Widger finished second over The Longest Yard, who was less than a length back in third for driver Michael Oosting.

Gentle Giant was favored in the race, paying $4.80 for the win. He is owned by Country Club Acres Inc., Acadia Farms Inc., Joe Sbrocco, and In the Gym and Lombardo Racing. Brian Brown trains the Oakwood Farm graduate, who earned his second win in the event and also added a new lifetime best to his stats line. He now has in excess of $121,000 in earnings heading into the final Friday, Oct. 15 at Harrah’s Hoosier Park.