It was a lightning fast night at Harrah’s Hoosier Park as three-year-old pacing colts competed in two divisions of Indiana Sires Stakes action. Both divisions dipped under the 1:50 time barrier with eight horses recording times under the mark. 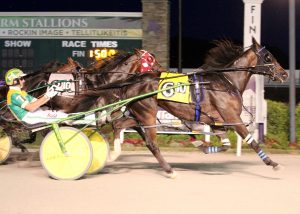 The first division was handled by Rockie Got Framed and Ricky Macomber Jr. The Rockin Image gelding got away in mid pack and moved up in the final quarter, chasing down race leader Tellmeaboutit and Michael Oosting and fending off Shamwow and LeWayne Miller for the win. Rockie Got Framed paced home in :26.2. for the win in a new lifetime mark of 1:49.3. Shamwow was second over Tellmeaboutit for third. All three horses paced under the 1:50 time barrier.

Rockie Got Framed recorded his eight win this season in 16 starts. He is trained by Jamie Macomber for owners Ruffolo and Eleven Star Stables.

In the second division race favorite Little Rocket Man was ready to prove why he was tagged as the favorite, rolling to the lead just after the first quarter. Trace Tetrick kept the Rockin Image gelding alert through middle fractions before preparing for the late closers in the lane. Little Rocket Man rallied home in :27.2 to win by one-half length over White Hair Rocks and John DeLong. Pure Rock and Rick Plano finished third. The top five finishers paced under the 1:50 time barrier.

Owned by Russ Beeman and Jack Freeman, Little Rocket Man is now 10 for 13 in 2019. It was the second straight win off a brief layoff for Little Rocket Man. Missy Essig trains Little Rocket Man and also Shamwow, second place finisher in the first division to complete a very successful night of racing.