Cruisin Pearl and Bradley Ferguson were on cruise control for their third straight win Monday, July 27 at the Fayette County Fairgrounds in Connersville, Ind. It was the first of two days of action at Connersville for the Indiana Sired Fair Circuit (ISFC). 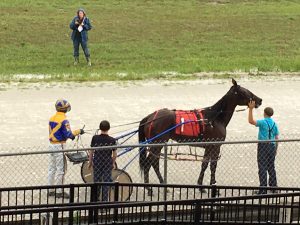 Cruisin Pearl stops for a photo following her win at Shelbyville. The Always a Virgin filly is now three for four in 2020 for driver Brad Ferguson and trainer Justin White. Photo by Tammy Knox

A daughter of Always A Virgin, Cruisin Pearl scored the gate to wire win in 2:07.1 with a final quarter in :30.4.  She was four and one-half lengths ahead of the next closest contender at the finish line with ER Sheila and Don Eash finishing second over Skyway Beach and Gerald Miller for third.

Cruisin Pearl is owned by Jerry Schwartz of Decatur, Ind. and is trained by Justin White. After finishing fourth in her career debut at Portland, she has rallied back for wins at Frankfort, Shelbyville and Connersville. Her best time to date was taken at Frankfort in 2:05.0. Michael Schmucker of Odon, Ind. is the breeder for Cruisin Pearl, who was a $4,500 purchase from the Hoosier Classic Yearling Sale last fall.

Three divisions of freshman pacing colts and geldings was also carded with Northern Network and Jordan Ross scoring the quickest division in 2:01.4. Starting from the second tier, Ross had Northern Network out to challenge at the three-quarter mile marker and got the lead in the stretch to pull away to a five-length win, a final panel in :29.4. Schwartz Bros Pat and Joey Putnam finished second over Go Randy Go and Mike Peterson for third.

Other freshman colt and gelding pacing winners on the day included ER Rocky and Don Eash in 2:04.1 and This Kit Rocks and Joey Putnam in 2:06.3.

Lester Raber scored two wins in the two-year-old filly trotting ranks. Molly’s Joan was a gate to wire winner in 2:06.3 while Spell Cuteypie came from off the pace to win in 2:12.3. The third division was won by trainer-driver Doug Rideout and Miss Greenbacks in a time of 2:06.3, a gate to wire effort.

Rideout also scored a win in the two-year-old colt and gelding trot with Mean Tweet, who started from the second tier, got good positioning throughout, and pulled away for the three and one-quarter length win in 2:10.2. Boom Pow and Charlie Conrad finished second over Fearless Tom and Rocky Loney for third.

Other freshman colt and gelding trotting winners included Yankees Aftershock and Jay Cross in 2:11.3 and Major Hooligan and Don Eash in 2:06.2.