Five Indiana sired horses traveled to The Meadowlands this past weekend to vie for a spot in the finals. Three will advance, placing Shirley Goodness, Rockin Nola and Gentle Giant in the prestigious event next weekend at The Big M. 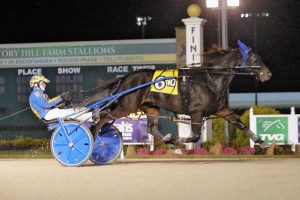 Rockin Nola and Joey Putnam, shown from a win at Harrah’s Hoosier Park, will be one of three Indiana sired horses in the Breeders’ Crown final at The Meadowlands Friday, Oct. 29 and Saturday, Oct. 30. Photo by Dean Gillette

Gentle Giant was the first to qualify, finishing third in his elimination Friday, Oct. 22 in a division of two-year-old pacing colts. The JK Endofanera colt led early, was shuffled back and held his ground at the wire to pace his mile in 1:51.1, a final quarter in :26.4. David Miller drove the colt for trainer Brian Brown. Country Club Acres Inc., Acadia Farms Inc. Joe Sbrocco and In the Gym & Lombardo Racing, all of Ohio, own the Indiana son, who was bred by Oakwood Farms.

Joining Gentle Giant in the Breeders Crown final will be Shirley Goodness from the Melanie Wrenn Stable. Also driven by David Miller, the Swan for All filly made a break before the start and got away in seventh place. She followed along and hit a second gear for the final panel trotted in :27.4 to close in for fifth place, good enough to advance to the final. She trotter her mile in 1:53.3.

Gentle Giant has drawn post one for next week’s Final, the $600,000 Two-Year-Old Colt and Gelding Pace at The Meadowlands Friday, Oct. 29.

Shirley Goodness is owned by Bill Beechy, Brad Maxwell and Kenneth Frieder. She was bred by Alan and Larry Troyer of LaGrange, Ind. Shirley Goodness has drawn post two for the $650,000 Three-Year-Old Filly Trot Final next Saturday at The Meadowlands.

The final qualifier is the standout older pacing mare Rockin Nola, who finished fifth in her elimination to advance to the final. The Rockin Image mare led the way early on for driver Joey Putnam and held game to the wire, only beaten three lengths. She paced home in :27.3 and recorded her mile in 1:49.2. Rockin Nola, trained by Joe Putnam, is owned by JP Racing LLC and Suttons Bay Racing. She was bred by Mahlon Lambright.

Rockin Nola has more than $728,000 in career earnings for the Putnam barn, who has campaigned her for her entire career. Her best time of 1:48.4 was taken earlier this year at Harrah’s Hoosier Park.

Rockin Nola has drawn post eight in the 10-mare final for the $330,000 Open Mares Pace next Saturday, Oct. 30 at The Meadowlands.