Thornbush Hanover and Allan Davis used a sweeping move to take over in the $13,500 conditioned pace at Harrington Raceway Monday, April 18. The duo scored the win in 1:54.1. 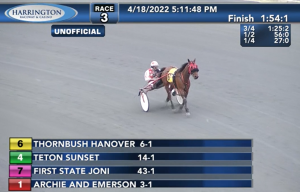 Thornbush Hanover used a big move for Allan Davis heading to the three-quarters to circle the field for the win Monday, April 18 at Harrington Raceway.

Starting from post six, Thornbush Hanover was content to move to the back as I’m Burlington N and Russell Foster left for the lead on the inside and the grey, Stunners Wish driven by Tony Morgan, rallied from the outside for a spot up close. I’m Burlington N held the top spot through the first two fractions of :27.0 and :56.0.

Heading to the half, Thornbush Hanover instigated the outer flow and moved out with a burst from the back, but no one wanted to join him, so he kept on task and moved up to the leaders at the three-quarters in 1:25.2. From there, he circled the leader and was on top by five heading into the stretch.

Thornbush Hanover paid $15.40 for the win. The five-year-old Always a Virgin gelding is trained by Bart Bradley, who co-owns the gelding with Vincent Bradley. Hanover Shoe Farms bred the gelding, who earned his third win of the year. His career best time was taken earlier this year in 1:52.0 at Dover Downs and overall, he has nine wins with more than $116,000 on his card.

Thornbush Hanover started off his career in Delaware under trainer Carlo Poliseno before joining the Dylan Davis Stable as a three-year-old and raced in Indiana Sires Stakes action. He has now been with the Bradley barn since early February and has only missed the top three once in nine starts.

Thornbush Hanover is from the near 100 percent producing mare Tempest Blue Chip, who has 10 winners in 11 foals. She has six with earnings over the $100,000 mark including Techtor Hanover, the Well Said gelding who is still racing and has earned $572,000. Thornbush Hanover is the only Indiana sired foal. He was purchased out of the Standardbred Sale at Harrisburg as a yearling for $5,000.

Two other Indiana sired horses were winners on the Monday card at Harrington. Rose Run Uriah, the six-year-old son of Jereme’s Jet, was a winner in 1:54.3 with driver Ross Wolfenden in the bike. The gelding is owned by Wade Wyatt and trained by Crissy Crissman-Bier.

Also winning on the card was the eight-year-old gelding Attention Please, trained and driven by Rick Still. The Rockin Image gelding was a gate to wire winner in 1:58.2, paying $5.20 for the win. David Yoder bred the gelding, who earned his first win of 2022.