Priceless, the uber-fast freshman from Indiana, appears to be ready for another stellar season. The three-year-old daughter of Rockin Image rocked her first qualifier of the year Friday, June 5 at Harrah’s Hoosier Park. 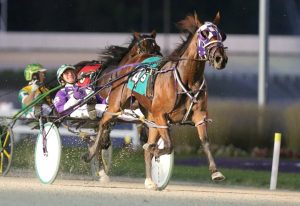 Driven by trainer Brandon Bates, Priceless left the gate with just enough speed to get to the inside path behind Comaneci and Peter Wrenn as Elite Five and Dale Hiteman moved along the outside, reaching the quarter in :27.3. The pace continued down the backstretch with a :28.3 second quarter before Priceless began her descent on the leaders. At the head of the lane, Priceless moved into another gear and pulled away from the field, pacing the final panel in :26.4 for the 1:51.4 win, two and one-half lengths ahead of Genie Rockwell and James Yoder, who closed in or second. Sweet Filly and Michael Oosting finished third.

Owned by Kevin Miller and Bert Hochsprung, Priceless completed her freshman campaign with seven wins in 11 starts and nearly $350,000 in earnings. Her best time was recorded at Woodbine in 1:50.2 when she won her Breeders Crown elimination. She was bred by Mark, Mervin and Jacob Graber of Grabill, Ind. and was purchased through the Hoosier Classic Yearling Sale under the name Rockin Diva for $31,000. In addition to Indiana Sires Stakes, she is eligible to several stakes in North America this season including the Breeders Crown which returns to Harrah’s Hoosier Park in late October.

Other Indiana winners on the Friday card included another winning performance for the John Delong Stable Seventimesacharm. The sophomore filly, who is a full sister to Seventimesavirgin, completed her mile in 1:54.2 with a final panel in :26.3. Odds on Algorithm, another Always a Virgin three-year-old filly from the John and Tabitha DeLong Stable, was a winner in the very next race in 1:55.1 with a final quarter in :26.3.

Last year’s top sophomore pacing colt Tellmeaboutit turned in a quick qualifier Friday with a 1:52.3 clocking in the fourth race of the day. Trained by  Alvin Miller, the Tellitlikeitis four-year-old gelding rallied home by more than five lengths in 1:52.3, a final quarter in :26.4 with Michael Oosting in the bike.

Tellitlikeitis also had another winner on the day from the Marty Rheinheimer Stable. Gertie’s Gordy, a four-year-old gelding, moved up in the lane to win in 1:54.1 for Ricky Macomber Jr. He was a three-quarter length winner over Skylar and Joey Putnam with a final quarter paced in :26.2.