Freaky Flyer is making the most of his final season on the track. The 14-year-old Indiana sired gelding scored another win at Pompano Park Tuesday, March 22 with Wally Hennessey in the bike. 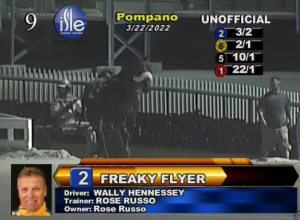 Referred affectionately as “The Freak” by Pompano Track Announcer Gabe Prewitt, Freaky Flyer laid low early in the claiming pace as several horses vied for the lead from the start, pushing challengers three wide in the turn with ER Hotshot and Tyler Jones finally getting the call at the quarter in :26.4. However, before the half, ER Hotshot was pulled to the outside with broken equipment and was pulled up. Modern Day Prince and Patrizio Ancora inheriting the lead at the half in :55.2.

Down the backstretch, Eastender and Fern Paquet Jr. forced Freaky Flyer out of his resting spot before the three-quarters in 1:25.1, but Freaky Flyer was up to the task. Leading the outside charge around the final turn, he caught up with JK Nowornever and Kevin Wallis and matched strides with him the entire length of the stretch. In the final stride, Freaky Flyer was able to get the nod by a nose for the win in 1:54.3. Creighton Hanover, a 13-year-old son of Camluck, kept up the veteran theme in the race to finish third for David Miller.

Freaky Flyer paid $5.00 for the win. The Dontgetinmyway gelding is owned and trained by Rose Russo of Batavia, NY. Eugene Yoder bred the veteran warhorse, who has a lot of pace left for his final season. It was his third win of the season in 10 starts with only two of those outings worse than second. Overall, “The Freak” has 56 wins in 429 starts with earnings of more than $345,000. His career best time was taken as a nine-year-old at Batavia in 1:53.2. He has one a race every year with the exception of his three-year-old season and competed through his five-year-old campaign at Harrah’s Hoosier Park before relocating to the East Coast and then Florida for the winter.

Freaky Flyer has been involved in the claiming game throughout most of his career. He has changed hands 30 times over the years and was claimed by Russo last summer. Freaky Flyer was sold as a yearling in 2009 under the name Westedge Nic A Way before receiving a name change. He brought $2,800 through the sales ring at the Indiana Select Yearling Sale. The gelding was one of 35 foals by Dontgetinmyway sold at auction that year. The class also included Radar Contact, the standout mare who earned nearly $1 million in her career.

It was one of two wins on the card for the Russo Stable, who also connected with Pick Six earlier in the night in conditioned pace action. The 10-year-old Bettor’s Delight gelding, driven by David Miller, was a winner in 1:55.0.