It was a dominant day for the combination of Erv Miller and Trace Tetrick, which included a win in the 96th edition of the $55,670 Fox Stake during Grand Circuit Racing at the Indiana State Fair. Coach Stefanos was a near gate to wire winner in 1:52.0, just three ticks off the track record for two-year-old pacing colts and geldings. 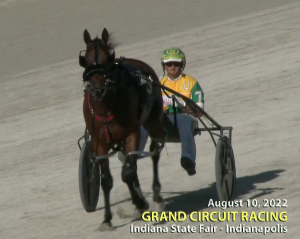 Trace Tetrick guides Coach Stefanos back to the winner’s circle following his win in the Fox Stake at the Indiana State Fairgrounds Wed. Aug. 10.

There was a lot of early speed in the Fox Stake as several horses went for the lead from the start in the six-horse field. Strengthfromabove and Brandon Bates had the advantage inside heading into the first turn, but Coach Stefanos had every intention of moving on to take over and crossed over to the front at the quarter in :28.2. The Tellitlikeitis gelding kept the tempo lively heading to the half in :56.0 with Strengthfromabove sitting right on his back. Frankie Frankie and Atlee Bender also stayed close to the leaders to the three-quarters in 1:24.0.

At the head of the lane, the top three had moved away from the remainder of the field. Strengthfromabove moved out to challenge with Frankie Frankie the widest of all in his pursuit of the title, but Coach Stefanos was super tough, maintaining his position and his speed all the way to the wire for the three-length win in 1:52.0. Frankie Frankie moved up for second over Strengthfromabove for third.

Coach Stefanos came into the race off a win in Indiana Sires Stakes action. His performance in the Fox Stake was a new lifetime mark as he improves his stat line to four wins in five starts. Miller, who had five wins on the Fox Stake Day, trains the freshman for Kenneth Duffy, D & M Trading II and John Chris Stefanos, all of Orland Park, Ill., a suburb of Chicago. Victory Hill Farm bred Coach Stefanos, who now has more than $77,000 in career earnings.

Tetrick and Miller started off their day with a win in the filly division of the $27,832 Horseman Stake in race two with JK’s Rollin Baby. The JK Endofanera three-year-old filly led gate to wire, posting the mile in 1:50.1, a new track record for three-year-old pacing fillies and equaled the overall track record at the Indiana State Fairgrounds. Pure Silky and Sam Widger finished second over Alloutblitz and Peter Wrenn for third.

It was the fourth straight win for JK’s Rollin Baby, who is owned by Engel Stable of IL, Flatrock Stable, Louis Willinger and George Golemes. Mahlon Lambright bred the track record holder.