Harrah’s Hoosier Park is set to host another big night of racing Friday, Sept. 23 and once again, the nation’s top pacing horse, Bulldog Hanover, is back. A full field of 10 will line up behind the starting gate in the $200,000 Harrah’s Hoosier Park Pacing Derby on Caesars Trotting Classic Night. 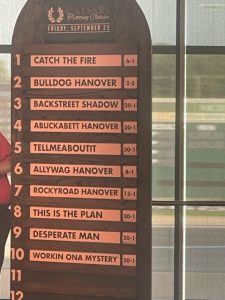 A look at the Harrah’s Hoosier Park Pacing Derby field for Friday, Sept. 23. The race is one of nine stakes on the card with purses over $1.5 million. Photo by Tony Renz

Bulldog Hanover is the overwhelming favorite in the Harrah’s Hoosier Park Pacing Derby at odds of 2-5 on the morning line. The Shadow Play four-year-old horse comes into the race with 10 wins in 11 starts for Jack Darling. Dexter Dunn will be back in Indiana to drive Bulldog Hanover, who is owned by Jack Darling Stables and Bradley Grant of Ontario.

A $28,000 yearling purchase from the Standardbred Horse Sale at Harrisburg, Pa., Bulldog Hanover captured the world’s attention when he won this year’s Haughton Final at The Meadowlands in 1:45.4, the fastest mile ever recorded in Standardbred racing history. From there, the horse made his next start in the Dan Patch, easily winning the event in 1:48.1. Bulldog Hanover likes the oval at Harrah’s Hoosier Park and is undefeated in five career races over the past two years. A win in the Harrah’s Hoosier Park Pacing Derby will put him over the $1 million mark for this year alone.

The second favorite of the field is Catch the Fire, who starts from post one for driver Andrew McCarthy. Todd Luther trains the horse, who has the second fastest time this year of 1:46.4. He’s been tagged on the morning line odds at 6-1.

Several stakes are on the 15-race card Friday and will lead up to the featured $220,000 Caesars Trotting Classic in Race 14. With 10 entrants in the race, Cuatro De Julio will be the morning line favorite at odds of 2-1. Yannick Gingras gets the call for trainer Marie Ortolan Bar and will start from post one.

The second favorite of the field is right behind Cuatro De Julio in post 10. Bella Bellini, who has won six of 13 starts this season and has a mark of 1:49.4, is the second choice on the morning line. Driven by Dexter Dunn, the four-year-old Bar Hopping mare has more than $1.6 million on her card for trainer Nifty Norman.

First post for Friday’s action-packed card is 6:15 p.m. The card includes nine stakes with purses of $1,560,000 offered for the night.