Trace Tetrick, Sam Widger and Michael Oosting will be part of the 30-driver regiment seeking the title in the third annual $25,000 North America Drivers Championship slated for Miami Valley Racing in Lebanon, Ohio. The three-day contest begins Sunday, Jan. 6 with the final round on the Tuesday, Jan. 8 program. 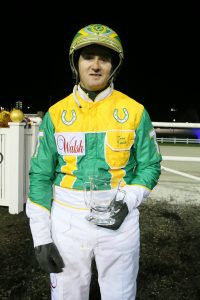 Driver Trace Tetrick is shown with the trophy for the 2018 Leading Driver award at Hoosier Park. (Photo by Linscott Photography)

All 30 drivers will compete in four races each during the first two days of action. The top 10 in points after the second day will advance to the final Tuesday. The top prize in the contest is $10,000 to the winning driver.

Tetrick, Hoosier Park’s all-time leading driver, is the defending champ in the event. He begins his challenge in the fourth race Sunday. Widger will begin in race three Sunday while Oosting will also get his first chance to earn points in the fourth race on the day. The championship begins each day in Race 2 on the 13-race card that begins at 2:05 p.m. each day.

Dexter Dunn, a native of New Zealand, has been tagged as the early favorite. According to the early morning line for the races, Dunn has drawn the best horses for the competition.