Trace Tetrick has established his name as synonymous with Indiana Standardbred racing. Since beginning his career in the bike at the age of 17 in 2003, the Geff, Ill. reinsman has become the all-time leading driver at Harrah’s Hoosier Park and at the conclusion of the 2020 racing season Sat. Nov. 21, he recorded his ninth leading driver title, the most of any other driver in the 26-year history of the track. It was his seventh straight title. 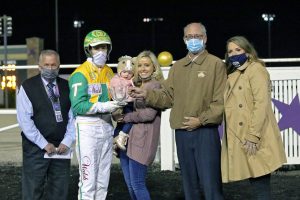 Trace and Sandy Tetrick, with their daughter Chloe, are presented with the 2020 leading driver award by Rick Moore, vice president and general manager of racing along with Joe Morris, senior vice president of racing for Caesars Entertainment, and Emily Ratcliff, on-air racing analyst. Photo by Dean Gillette

Tetrick completed the shortened meet, which began Tuesday, June 16, with 277 wins in 1,323 starts. In all, horses he drove accumulated in excess of $3 million. Tetrick was the only driver to eclipse the $3 million mark. Tetrick’s final tally was 111 wins ahead of second place finisher Sam Widger, who scored 166 wins with John DeLong finishing third with 146. Brandon Bates finished fourth with 108 wins followed by LeWayne Miller with 103 wins to round out the top five.

Tetrick maintained a UDRS of .330 with a 21 percent win average. Although 163 of the horses Tetrick drove were favorites, the 34-year-old did win 41 races with longshots throughout the meet. Bates was second on the list of winning longshots with 40.

Tetrick was joined in the winner’s circle by his wife, Sandy, and his daughter, Chloe, for the leading driver presentation. Rick Moore, vice president and general manager of racing, Joe Morris, senior vice president of racing for Caesars Entertainment, and Emily Gaskin, on-air racing analyst for Harrah’s Hoosier Park, made the presentation.