Trace Tetrick, Harrah’s Hoosier Park’s all-time leading driver, has kicked off 2021 in a big way. The Geff, Ill. native is currently ranked second in the nation for wins this year behind Aaron Merriman. 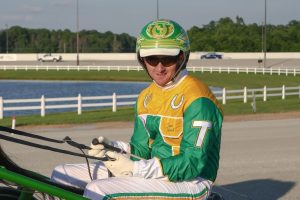 Trace Tetrick is currently ranked second in the nation for wins among all North American drivers in 2021. Photo by Dean Gillette

Through Thursday, Feb. 18, Tetrick has scored 83 wins in 373 starts. Of those starts, 154 have been top three finishes. Horses driven by Tetrick have accumulated more than $700,000 and he is averaging a .309 driving average this season. Merriman leads all North American drivers with 107 wins.

Tetrick has 5,836 career wins through Thursday, Feb. 18. With over $62 million in career earnings, he has turned in $1 million-plus purse earning seasons the past 14 years and is well on his way for a 15th straight year in six figures. His best year to date was in 2017 when he garnered nearly $7 million in earnings and won 569 races. It was also the same year he won his second Breeders Crown title with Fiftydallarbill.

Tetrick, who now resides in Anderson, Ind. with his wife, Sandy, and daughter, Chloe, is currently leading the driver standings at Miami Valley Raceway. He will resume driving duties in Indiana when Harrah’s Hoosier Park opens at the end of March for the 28th season of Standardbred racing.