With three weeks left in the 29th season of Standardbred racing at Harrah’s Hoosier Park, two familiar faces are atop the standings in both the driver and trainer standings. Trace Tetrick is once again leading in the driver category while Tyler George just set a new record for most wins in one season by a trainer with his 120th win of the meet. 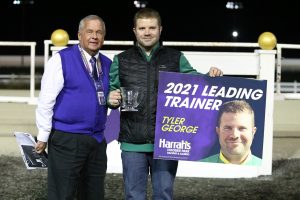 George, a native of Ohio, is currently 10 wins ahead of Erv Miller in the standings. Horses from his barn have won at a 34 percent clip this year and produced a training average of .474. The stable has accumulated more than $1.6 million. Two horses share the top spot for George as General Dolan and Mac’s Big Boy have each won seven races. Rollin Rosie follows with six wins. George has won the training title the past two years. Another title this season will be his third straight.

Miller, who has won 110 races, has a win percentage of 25% with a UTRS of .390. Top horses from his barn this year include Ponda Adventure, winner of 12 races, Sure Thing Herman, winner of eight races, and JK’s Rolling Baby, who has won seven races.

A total of seven trainers have accumulated earnings over the $1 million mark this season. George and Miller are joined by Jeff Cullipher, Walter Haynes Jr., Missy Essig, Melanie Wrenn, and Ron Burke with earnings over the mark.

In the driver standings, Tetrick is more than 100 wins ahead of John DeLong, who is in second place. Tetrick has won 372 races and more than $5 million in earnings this season. He is maintaining a win percentage of 23% and a driving average of .344. He is the only driver in the top 30 that has a win percentage over 20 percent.

DeLong is 40 wins ahead of Sam Widger, who holds down third place. Brandon Bates is in fourth over Michael Oosting in fifth place. A total of 10 drivers have accumulated purse earnings in excess of $1 million. Outside of the top five, other drivers in the elite group include Peter Wrenn, Jordan Ross, Atlee Bender, Joey Putnam and Dexter Dunn.