Trace Tetrick, the all-time leading driver and multi-year defending reinsman at Harrah’s Hoosier Park, had another banner year in racing. The Geff, Ill. driver completed 2019 with 478 wins to finish seventh among all North American drivers for the year. Tetrick’s tally also brought in less than $500,000 shy of $6 million in purse earnings for the year with a UDRS average of .318 over more than 2,400 starts. 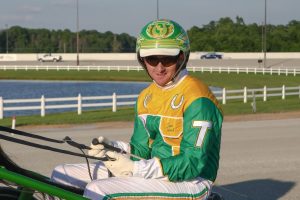 Trace Tetrick finished seventh among all North American drivers for wins in 2019. His earnings tally was just shy of $6 million for the year. Photo by Dean Gillette

In the final national training ranks, Harrah’s Hoosier Park’s top conditioner Jeff Cullipher finished in 12th place among North American trainers with 186 wins. Horses from Cullipher’s barn accumulated more than $3.4 million in earnings with a UTRS of .289. Trent Stohler finished 25th in the standings with 142 wins from 754 starters with purse earnings in excess of nearly $1 million and a UTRS of .318. Other trainers in the top 50 included Tyler George in 38th place with 126 winners and purse earnings of more than $1.6 million, sporting a UTRS of .397 and Pete Redder in 49th place with 105 wins and purse earnings of just under $900,000 with a UTRS of .326.

In the horse ranks, J-S Miss Carly from the Jack Myers Racing Stable picked up a 10th place finish among all two-year-olds on both gaits. The freshman daughter of Guccio won 10 of 15 races and earnings of more than $54,000 for the spot among the winningest freshman in North America. Her best time was recorded 1:58.2 at Harrah’s Hoosier Park for driver Alex Udell. Among only two-year-old trotters, J-S Miss Carly was ranked sixth while Rock Swan, a daughter of Swan for All, cracked the top 10 with nine wins in 10 starts.

The only other horses in the top 10 were found in the older trotting ranks. Swansea and Swan Leader were ranked third and fourth respectively among the older trotters with 14 wins each. Swansea got a slight edge in the rankings by purses with $255,000 accumulated compared to Swan Leader’s $94,000.