For the past six years, Trace Tetrick has made his way to the winner’s circle as the season’s top driver. However, in 2019, he experienced a first at Harrah’s Hoosier Park when the meet concluded Saturday, Nov. 9. Tetrick was greeted by his infant daughter Chloe, who was born earlier this year. Someday, the photo of Tetrick accepting the award in one hand and holding Chloe in the other, will be one of those photos that lives on forever in the family’s hearts. 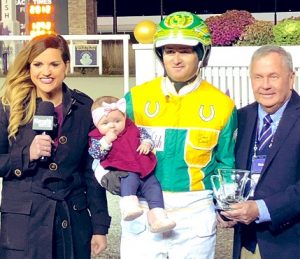 “The support of my family and friends has been great,” said Tetrick. “My wife, Sandy, and I are extremely lucky, and we are surrounded by a lot of great people.”

Tetrick complete the 2019 racing season at Harrah’s Hoosier Park with 328 wins from 1,657 starts. Horses he drove amassed in excess of $4.4 million during the year and he ended up with a UDRS driving average of .327. Overall, Tetrick surpassed the $55 million mark in purse earnings this year and completed his fourth consecutive season with purse earnings over the $5 million mark. With a total of 478 wins as of press time, Tetrick is ranked fifth in the nation for wins.

“I want to thank the owners, trainers, and grooms who put me in the position where I can do well every night,” Tetrick noted through a Hoosier Park press release. “I’m always focusing on one race at a time and my goal is to win that race. I’ve had great horses to drive all season and have been lucky to be in the right spots at the right time. I am going to take a few weeks off and take a little vacation before getting back to work at the first of the year and of course, look forward to being ready to go back here in March.”

Sam Widger finished in second place with 303 wins followed by John DeLong with 256, Michael Oosting with 150 and LeWayne Miller with 128 to round out the top five. All five drivers also had in excess of $2 million in earnings for the 2019 season at Harrah’s Hoosier Park.