Trace Tetrick has long been the leading driver at Harrah’s Hoosier Park. He took his driving to the next level during the 2021 racing season, scoring 403 total wins, the first time a driver has reached that number of wins in one season. 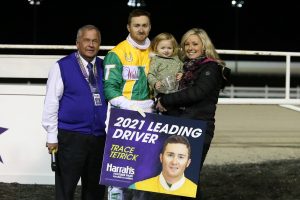 Trace Tetrick is joined by his wife, Sandy, and his daughter, Chloe, for the trophy presentation for leading driver in 2021 by Rick Moore, Vice President and General Manager of Racing. Photo by Dean Gillette

Tetrick hit the 400 mark in the final race of the night Friday, Dec. 3 and returned for three wins on closing night, including the last race of the meet behind Sandy Sue. In all, Tetrick drove in 1,877 races and maintained a 21 percent win average with an overall UDRS of .331. He just missed accumulating $5 million in purses for the season. It was his 10th title at Harrah’s Hoosier Park and his eighth consecutive title.

John DeLong finished second in the standings with 256 wins followed by Sam Widger in third with 236. Brandon Bates completed the meet in fourth with 170 wins and Michael Oosting rounded out the top five with 168 wins. LeWayne Miller (119) and Joey Putnam (110) finished sixth and seventh and were the only other drivers to win more than 100 races during the 160-day race meet.

Tetrick in on track to eclipse his best year to date, which was recorded in 2017. He completed the 2021 racing season in Indiana with 559 wins and purse money of $6.4 million. In 2017, he scored 569 wins and purses of $6.8. Overall, Tetrick has 6,312 wins and $67 million in purse earnings from 37,894 starts. Tetrick is currently in third place in North America among leading drivers behind Aaron Merriman with 793 and older brother Tim Tetrick with 607. Ronnie Wrenn is currently in fourth with 552 wins. They are the only four drivers who have earned more than 500 wins this season.

Tetrick was honored during the final night of racing by Rick Moore, Vice President and General Manager of Racing. He was joined by his wife, Sandy, and his daughter, Chloe, for the presentation.