Racing at Harrah’s Hoosier Park is in its final two days and with that comes the final Open Pace of the meet. Last year’s sophomore pacing colt champion in Indiana Sires Stakes took home top honors in the $23,000 The Empire Casino Open Pace Friday, Nov. 20. 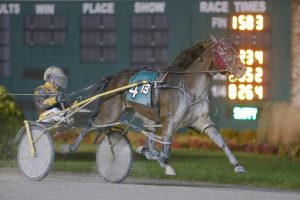 Driven by Peter Wrenn, Tellmeaboutit floated out of the starting gate from the outside post nine and got away in mid pack as Boiling Oar and Sam Widger sprinted out to the early lead, crossing by the quarter in :26.2. Boiling Oar continued to lead the way through the half in :54.2 and 1:22.3 before being challenged at the top of the stretch.

Late closers began to pounce with Tellmeaboutit and Wrenn moving up, rolling right on by for the three-length win. Hesa Kingslayer N and Trace Tetrick paced home in :25.1 for a big move late for second over Fox Valley Gemini and Casey Leonard, who finished another neck back in third. The time of the mile was 1:49.1 for Tellmeaboutit.

Owned by Twila Harts and Alvin Miller, who is also the trainer, Tellmeaboutit earned his fifth win of the year and his 16th overall. The Tellitlikeitis four-year-old is closing in on $500,000 in career earnings. His mark of 1:48.3 taken last year at Harrah’s Hoosier Park remains as his career best. Lavon Miller of Topeka, Ind. is the breeder on the Indiana champion.