Tellitsassymae, the talented Indiana sired pacing mare from the Ernie Gaskin Stable, scored a win at The Meadowlands Friday, Feb. 12. Driven by Dexter Dunn, the five-year-old was a winner in 1:52.0 in conditioned pace action. 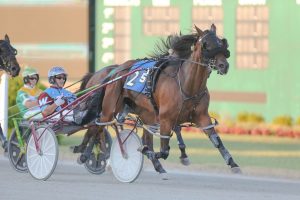 Tellitsassymae, shown winning at Harrah’s Hoosier Park in 2019 with Sam Widger driving, kicked off 2021 with a win in her first start Friday, Feb. 12. Photo by Dean Gillette

Starting from post four, Dunn had intentions early on of getting to the lead, but was parked on the outside with Tellitsassymae at the quarter in :28.0 as Arnie’s Angel and Todd McCarthy passed by the quarter mile marker in the lead. Tellitsassymae got to the top before the half in :56.0 and led the rest of the mile, fending off a late move by Arnie’s Angel in the stretch by three-quarters of a length. Windsong Parisian and Corey Callahan finished third.

The favorite in the field, Tellitsassymae paid $3.20 for the win. The Tellitlikeitis mare is owned by Henry Blackwell II, Darla Gaskin and Emily Ratcliff, all of Indiana. Travis Alexander trains the pacing mare who was bred by Rebekah Yoder and Kelsey Groff.

Earlier in the night, another Indiana sired horse made its way to the winner’s circle. Rockin Panda, driven by Andrew McCarthy stormed out of post nine to the lead and never looked back, opening up to a four and one-half length win in 1:53.4. Trained by Jamie Gerard, the Rockin Image eight-year-old gelding paced home in :28.4 for the win over Thunder Dome, driven by Todd McCarthy, and Major Jesse, driven by Corey Callahan.