Tellitsassymae, the former member of the Ernie Gaskin Stable, scored a big win at Harrington Raceway Tuesday, April 26. The Indiana sired mare cruised under the wire in 1:53.3 with driver Art Stafford Jr. at the controls. 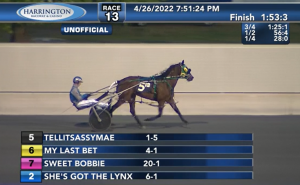 Starting from post five, Tellitsassymae rolled out to the lead and secured the top spot by the quarter in :28.0. From there, she was untouchable, posting middle fractions of :56.4 and 1:25.1 before drawing away from the field, posting a three and one-half length victory. My Last Bet and Tony Morgan finished second over Sweet Bobbie and Jason Thompson for third.

Trained by Chuck Crissman Jr., Tellitsassymae paid $2.60 as the favorite of the field. The six-year-old Tellitlikeitis mare is owned by EVM Racing LLC of Delaware. Rebekah Yoder and Kelsey Groff bred the mare, who scored her first win of 2022. Overall, she has 16 career wins and earnings over $215,000. Her career best time was taken as a three-year-old at Harrah’s Hoosier Park in 1:50.1.

Tellitsassymae completed her four-year-old season with the Gaskin barn before heading out east with new connections. She started off at Yonkers and The Meadowlands before venturing down to Delaware.

Tellitsassymae is one of 14 foals from the Jenna’s Beach Boy mare My Girl Maddie. She has three foals with six-figure earnings including Jammin Joshua, who was also campaigned by the Gaskin barn to earnings of more than $650,000 and a mark of 1:49.3. Jammin Joshua is now a sire in Indiana.

The family has a full brother to Tellitsassymae that is a two-year-old this season named Tellitlikebud and a yearling half brother named Rockin JR, who is by Rockin Image. Tellitsassymae joined two other foals that year by the sire as the highest priced yearlings of 44 sold at auction. The trio of horses each brought $30,000 through the sales ring at the Hoosier Classic Yearling Sale. The other two foals at that price point were Hoosier Z Tam and Marley It Is, both colts.

Earlier in the evening at Harrington, another Indiana sired winner was recorded as Stafford Jr. guided Cruzinforavictory to a win in 1:53.3. The seven-year-old Hypnotic Blue Chip mare, trained by Eric Davis for Jeff Clark, picked up her fourth win of 2022 and her 21st overall. She is approaching $300,000 in career earnings and was near her best time of 1:53.0 Tuesday. She earned her career mark last year as a six-year-old at Rosecroft Raceway.