Two year old pacing colts and geldings took center stage Thursday, Sept. 14 at Hoosier Park with a new star emerging in the $85,000 Indiana Sires Stakes final. Ima Real Ladys Man and Michael Oosting powered to the lead late in the race for the win in 1:51.1. 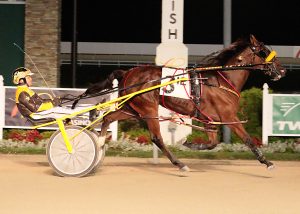 Starting from the center of the pack, Ima Real Ladys Man was content to stay behind as Frontier Telaphras and LeWayne Miller moved to the lead from the outside to match wits with race favorite Ollie’s Ztam and Ricky Macomber on the inside. The two horses traded the top spot before Ima Real Ladys Man came into the mix around the final turn and took over. The Tellitlikeitis gelding moved out to a three and one-half length victory at the wire over Tellmeaboutit and Peter Wrenn, who maintained ground over Frontier Telaphras for third.

It was the third win of the season for Ima Real Ladys Man, who is owned, trained and bred by Perry Smith of Crete, Ill. Ima Real Ladys Man now has in excess of $77,000 in purse earnings in only seven career starts.

Ima Real Ladys Man is one of the most recent products of first crop sire Tellitlikeitis to emerge on the scene in Indiana. His mother, Im The Real Lady, who is also Indiana bred from the sire Real Desire, was also an Indiana Sires Stakes champ at two for Smith. Ima Real Ladys Man is now one of five two-year-olds this season who have taken marks of 1:52 or quicker. All three top finishers in the Indiana Sires Stakes final were by the sire Tellitlikeitis.