Tellawoman, the four-year-old daughter of Tellitlikeitis and 2019 Indiana Sired Fair Circuit three-year-old filly champ, was a winner at Yonkers Thursday, Feb. 13 for her new connections. The Indiana sired mare was favored in the conditioned pace over a good racing surface and stopped the timer in 1:55.0. 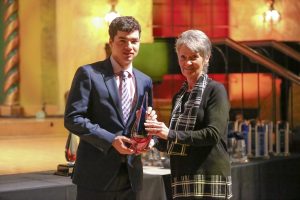 Former Co-Owner and Driver Joey Putnam accepts the award for ISFC Three-Year-Old Pacing Filly of the Year for Tellawoman at the recent Indiana Standardbred Banquet. Pam Cross made the presentation. Photo by Dean Gillette

Now owned by Triple D Stables Inc. and Michael Ferriero, Tellawoman turned in a gate to wire performance, rallying home to a six and three-quarter length win at the wire. George Brennan drove for trainer Scott DiDomenico for her first win of the year.

A winner in 10 of 26 starts at three, Tellawoman was a force on the Indiana Sired Fair Circuit (ISFC) for trainer Joe Putnam and driver Joey Putnam. She was owned by the Putnams along with Michael Lee before being sold in early September. Since leaving Indiana, she has raced exclusively at Yonkers and her win Thursday was her second for her new connections. She was bred by Elvon Miller of Topeka, Ind.

Tellawoman is the last foal from the Art Major mare Twin B Snicker. She now has in excess of $83,000 in career earnings and her career best time of 1:54.3 was taken last year at Yonkers.