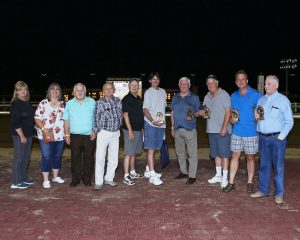 Saturday Shootout began with four preliminary rounds starting June 8 to determine the top five players from each location. Following the final preliminary round Saturday, July 6, teams were set for both properties.

“We have to give a lot of credit to Randy Harlow,” said Ditto. “He really gave us some great handicapping tips and got us rolling early.”

Rossman added, “But we have to give Bill (Ditto) most of the credit. He was the one that led our scoring and if it wasn’t for Bill where would we be.”

Rossman, Ditto, Groce, Mosier, and Wilkinson each took home $1,000 for their victory. They also received individual trophies to represent their win in the Saturday Shootout final. Members of Team Indiana Grand split $1,000 and each took home $200.

Team Harrah’s Hoosier Park consisted of big supporters from the members of the team. Rossman owns several Standardbreds and Wilkinson works in the barn at Cal Expo every winter. Ditto has been an owner and Mosier and Groce are avid horseplayers. They studied hard for the final and compared notes before placing their selections for the final.

The contest has grown in popularity over the past five years with local players. It also creates a challenging scenario as players must handicap Thoroughbred, Quarter Horse and Standardbred races to reach the final. The final is based on four Thoroughbred and four Standardbred races. The final for the 2020 edition of Saturday Shootout will be held at Harrah’s Hoosier Park.