Team Hoosiers may not have come out on top in the fourth annual driving challenge at Hollywood Gaming at Dayton Raceway Saturday, Dec. 15, but driver Trace Tetrick made his presence known, winning five races on the card, four of which were in the driving challenge. 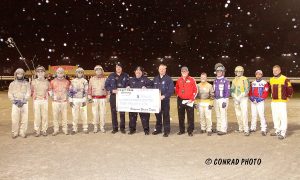 Both Team Buckeyes and Team Hoosiers donated all prize money from the annual driving challenge to local firefighters in the Dayton area. (Photo by Brad Conrad)

Tetrick kicked off the challenge in the first race with a win behind the Dan Ater trained Townlinedaliscard, and Indiana bred daughter of Dali.  Chris Page brought home a winner in the second leg with Tetrick winning the third leg behind Smiling Terror, trained by Jeff Brewer.

Tetrick’s third win in the challenge came behind Dateline Hanover for trainer Dale Loney before winning the fifth round with Whiskey Friskie for Brandon Piguet. But in the end, the Buckeyes won the final round thanks to an Indiana connected horse. Jeremy Smith scored the win with Indiana Cam, trained by Charles Stewart and owned by Grant Wilfong to secure the title for the Buckeyes. The final score was Team Buckeyes 359, Team Hoosiers 335.

The challenge was held every other race through the 11th on the 13-race card. Tetrick picked up an additional win with Tyd Theglyde, trained by Tyler George.

In addition to Team Hoosiers, Emily Gaskin, on-air racing analyst for Hoosier Park was in attendance and joined Dayton Raceway’s track announcer and on-air handicapper Barry Vicroy in the broadcast booth, offering insight into the challenge and the races.