Jusmakinyalook and Jordan Ross scored a win in the first division of Indiana Sires Stakes action for two-year-old filly trotters Wednesday, Sept. 15 at Harrah’s Hoosier Park. Trained by Robert Taylor, Jusmakinyalook moved out at the half and rallied in the stretch for the win in 1:55.2, a final panel in :27.1. She was a winner by one-half length over Luv Lorelei, also trained and driven by Taylor, who moved up the inside. Fleurie finished third. 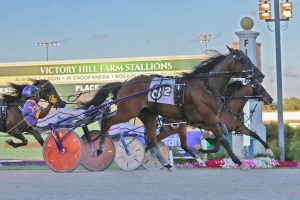 Jordan Ross guided Jusmakinyalook to a one-half length victory over stablemate Luv Lorelei on the inside, driven by trainer Robert Taylor in Indiana Sires Stakes action. Photo by Dean Gillette

Jusmakinyalook was a surprise, paying $25.40 for the win. The Pinetucky filly is owned by Devon Miller and bred by John Stoll. It was the second win for Jusmakinyalook, who is now two for five in her brief career. The race also marked a new career best for the filly.

Jusmakinyalook was one of six foals by Pinetucky that sold at the yearling sales last fall. She was the highest priced one, bringing $10,500 through the ring at the Michiana Classic Yearling Sale. Her dam, Beldame Hanover, never raced, but has produced several winners, including Canwetabemnow, who is a full brother to Jusmakinyalook and has a mark of 1:57.2. She has a half sister named Latte of Love by Swan in a Million in the yearling sales this fall.

Later on the card, M-M’s Dream and Sam Widger took a new lifetime mark in the fifth round of ISS action. The duo covered the one-mile distance in a time of 1:55.4.

Starting from post one, M-M’s Dream was the first to the quarter in :28.0 before Callmesue and James Yoder moved to the lead at the half in :57.3 after being parked early on. M-M’s Dream followed along behind Callmesue through the three-quarter mile marker in 1:27.3 before moving out and moving on, scoring the win by four lengths. R Desireable Lady and Trace Tetrick finished second over Callmesue.

M-M’s Dream is now four for six lifetime. The Swan for All filly is trained by Henry Graber Jr. for owners Eleven Star Stables, Frank Baldachino and Hillside Stables. Mervin Miller bred the filly, who moved over the $100,000 mark in earnings with the win. She is out of the talented race mare Trading Place, who had a mark of 1:53.2 and nearly $300,000 in earnings during her racing career. M-M’s Dream is the first foal with a yearling colt named M-M’s Taylor, also by Swan for All, and a weanling filly by Helpisontheway named M M’s Reflection. M-M’s Dream was an $18.500 purchase as a yearling from the Hoosier Classic Yearling Sale who sold late on the second day of the event.

Two divisions of two-year-old trotting colt and geldings for ISS action were also held later in the card Wednesday.