Swingforthefences kicked off the Wednesday, May 5 racing program at Harrah’s Hoosier Park with a win in the second round of the Expresson Series. Driven by Peter Wrenn, he trotted home in :26.4 to earn the victory in 1:55.2. 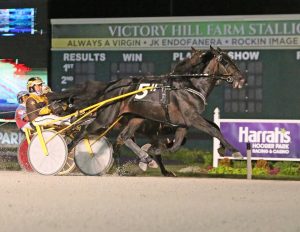 Swingforthefences, trained by Melanie Wrenn, was a winner in the second round of the Expresson Series at Harrah’s Hoosier Park Wed. May 5. He is shown with driver Michael Oosting from a win last year at two. Photo by Dean Gillette

Starting from post three, Wrenn was able to get Swingforthefences over to the inside path behind J-S Jasper and Brandon Bates, who set the tempo the entire way in :27.4, :58.1 and 1:28.1. In the stretch, Swingforthefences found the room he needed to trot home aggressively, winning by one length over J-S Jasper. Sir Jesse and Trace Tetrick finished third.

Swingforthefences was the heavy favorite in the race, paying $2.80 for the win. The three-year-old gelded son of Swan for All is trained by Melanie Wrenn and is owned by David McDuffee of Florida and L & L Devisser of Michigan. Concord Stud Farm of New Jersey bred the gelding.

It was the first start of the year for Swingforthefences. His mile in 1:55.2 also scored a new career mark for the Indiana Sires Stakes contender. He completed his two-year-old season with three wins and more than $131,000 in career earnings.

Swingforthefences was a $100,000 yearling purchase by his current connections from the Standardbred Horse Sale in Harrisburg. He is a half brother to Miss Sue V, who earned nearly $300,000 in career earnings during her career before being exported. He has a half-brother named P P E by Kadabra that is a two-year-old in 2021 that will be hitting the track soon in Canada.

It was one of two wins on the card for Peter Wrenn. He also connected with Fantasia Flurry in the second round of the Misnaughtybynature Series in a time of 1:56.1. Chris Beaver trains the three-year-old daughter of Swan for All owned by Beaver, William Rufenacht, Donald Robinson and RBH Ventures. Alan Troyer is the breeder on the filly, who is now two for two in 2021. The mile also marked a new career best for Fantasia Flurry.